Ahead of our clash v Portsmouth, we speak to former Iron midfielder Dave Syers, who enjoyed a fruitful couple of games in front of goal in the last season the two teams met.

Now 30, Dave Syers originally joined the club on loan from Doncaster Rovers before making that spell permanent in the January transfer window, aiding United to promotion from League Two in 2013-14.

REFLECTING ON HIS TIME WITH THE CLUB…
His association with the club would arguably begin following an impressive performance against the Iron in a 6-0 win for Doncaster reserves, in which he’d score two in front of 3,000 “Directioners” at the Keepmoat Stadium.

His arrival at United would see him soon claim a regular starting spot, but it wasn’t until a change of manager at the club when Syers’ importance to the team would come to the fore.

“That season was part of a great couple of years within my own professional career, winning the league at Doncaster and following that up with another promotion with Scunthorpe. They were the glory days of my career and what I will always remember fondly,” he said.

“It could have gone very differently after Brian Laws left. That first Portsmouth game itself could’ve gone differently, but it ended up being the catalyst for what became an amazing few months.

“From my point of few, the initial one-month loan was to get some game time and then to go back to Doncaster and hopefully be a viable option to go in the team. Quickly, I realised (then-Doncaster manager) Paul Dickov wasn’t looking to play me no matter what, so I was then looking for a more permanent move.

“When you’re winning games, football is the best job in the world. I was scoring and we were winning, so it became an easy decision.”

Syers would be recalled by Rovers in early-January, playing 90 minutes in their 3-2 home defeat against Stevenage in the FA Cup. Just seven days later, he’d be back on the pitch in claret and blue, departing the Yorkshire club for an undisclosed fee. 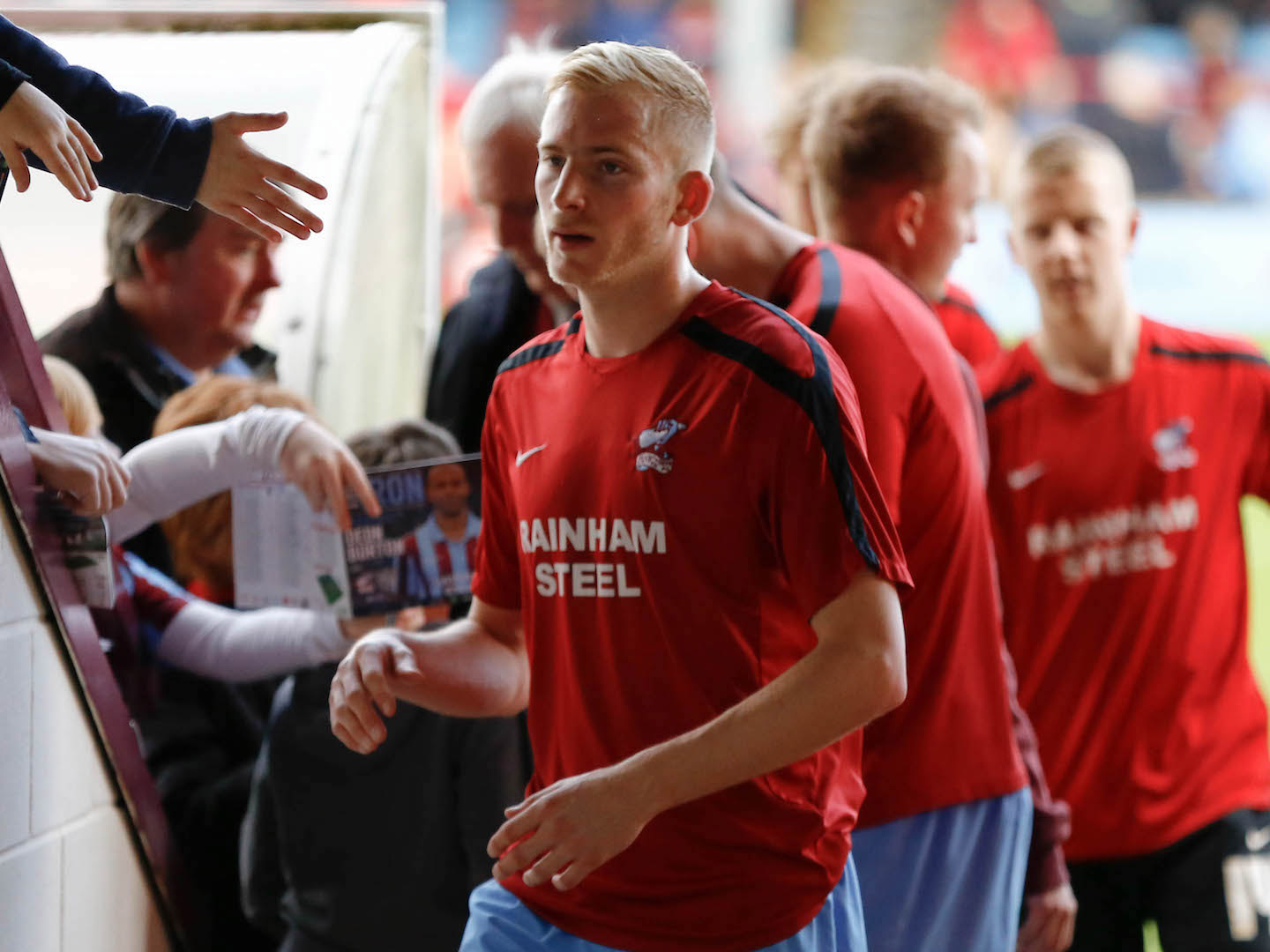 He wouldn’t miss a game amongst the 28 United went unbeaten, despite the eight-day return to his parent club.

He said: “Momentum is such a big thing in football, so getting the deal done quickly was key. We were lucky that Scunthorpe had a free weekend. I had to go back and play for Doncaster in the cup, but I was already hoping that a permanent deal would go through and thankfully it did in time for the next game away at Mansfield.

“Looking back now, there was a different sort of pressure built up because of the run we were on. We won 14 and drew 14. When you talk about winning promotion, you talk about getting, on average, two points a game – although we were doing it a different way to the norm. There were very few games where we came from behind, we just didn’t finish teams off. It could so easily have been 25 games won and three draws.”

ON FIVE GOALS AGAINST PORTSMOUTH IN 2013-14…
With Brian Laws removed from his position following the FA Cup defeat to Grimsby, it was the dawn of a new era for the Iron and Syers, who had already got seven appearances under his belt for the side on loan from Doncaster.

The first match of Russ Wilcox’s stint in charge would be away at Portsmouth – and it would be the beginning of a memorable 28-game run without a single defeat. 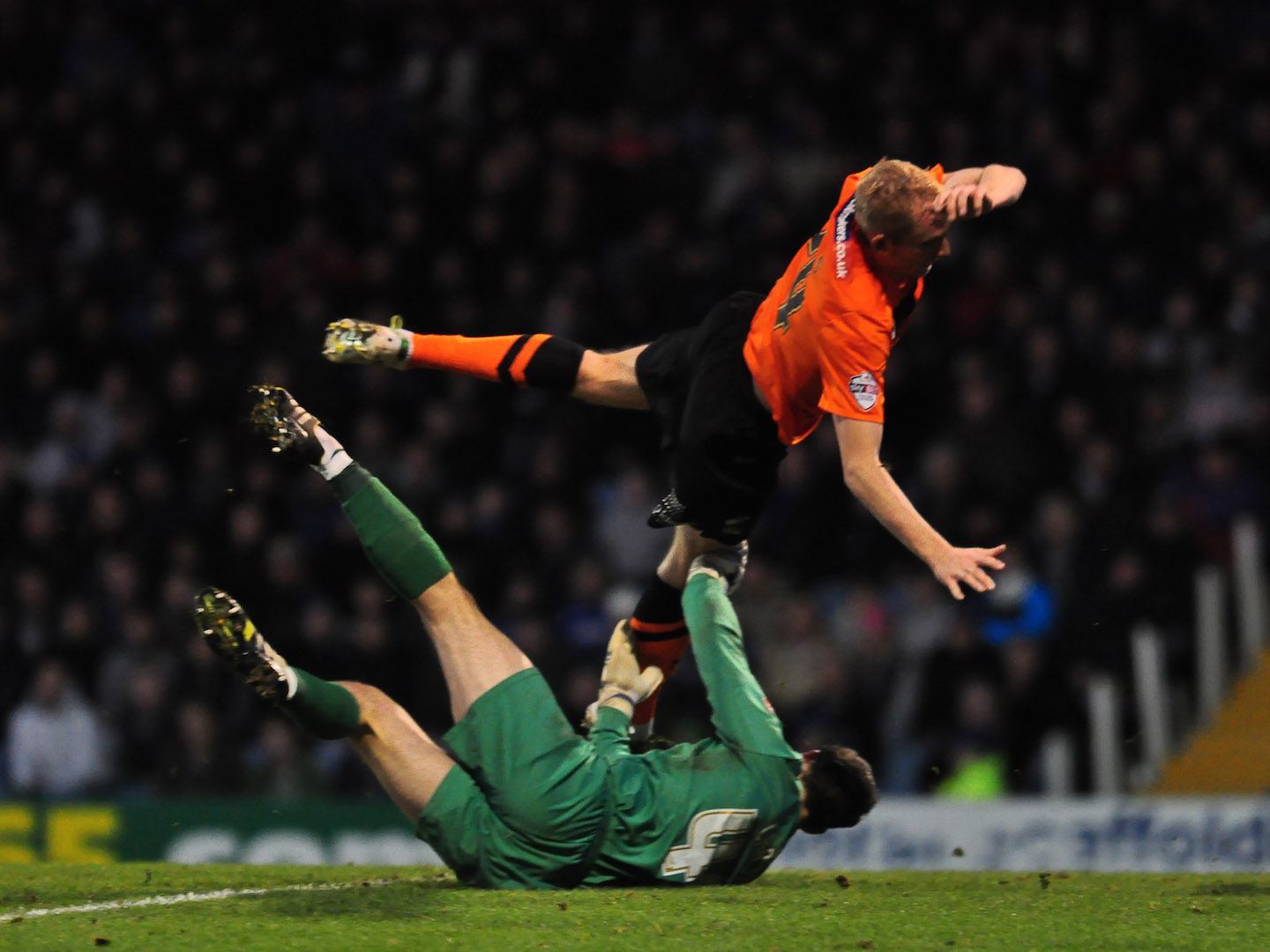 He said: “I can still remember the week. Russ came in and said he had been given the job on a caretaker basis but didn’t really have any expectation that he would get it on a permanent basis. We had a long trip down and did a session on the Friday afternoon in a park near the hotel. The ground was awful and frozen but there was an air of there being no pressure involved because of the previous results and it almost felt like a free game.

“We went behind early, but kept going and managed to turn it around. I’d not scored in my first five games on loan and it really was perfect timing to get them.”

Game 16 of the run would see the Iron face the first victims of the unbeaten run, with the reverse fixture at Glanford Park taking place at the end of February 2014 – the last time the two sides met.

Having netted a brace back in November, which had earned them the three points, Syers would go one better and take home the matchball in an emphatic 5-1 victory.

“It’s my only professional hat-trick and I’ve still got the ball in its case at home,” he continued. 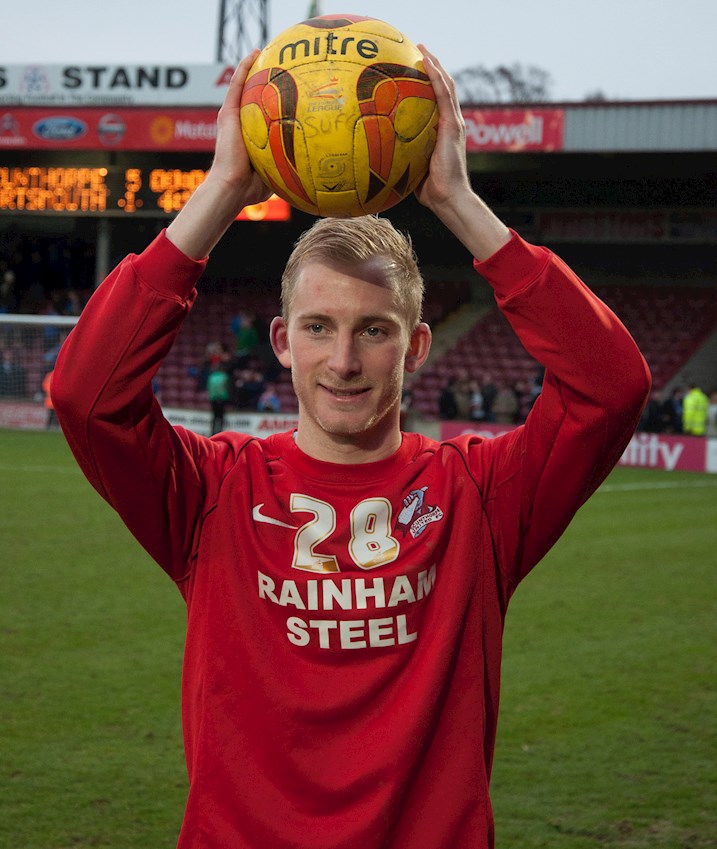 “It’s one of my greatest memories in football from a personal point of view. We had built up such a head of steam by then and I don’t think Portsmouth will look back at that day with any kind of fondness, but we’d developed into such a repetitive way of playing with a settled team. From my point of view, I got the first goal of the match early on with a bit of a deflection and it set us off and running. After a couple of left-footed goals, it’s always nice to have a three-yard tap-in from a good breakaway.”

ON THE INJURY AT SWINDON AND HIS CAREER THEREAFTER…
After the highs of 2013-14, the following campaign would come crashing down in the early minutes at Swindon with a knee ligament injury. He wouldn’t be seen in a Scunthorpe shirt again until the following April, and would make just eight further appearances for the club.

He said: “In reality, it ended my professional career. It’s so important that when you come back from being injured, you start playing straight away. With the managerial change, I never really got that opportunity and the longer you’re not playing the more questions are asked.

“We’d had a good pre-season and taken our confidence through. I can still remember getting the injury and feeling a strange pain in my knee at the time. It was a new season and I was desperate to not go off. The idea that I was jogging around for 30 seconds with basically nothing attached to my knee, including my hamstring, really shows what adrenaline can do for you sometimes.

“Within ten minutes of coming off the pitch, it was pretty apparent there was something seriously wrong. I remember taking a call from Daz (Mouatt) the physio and he told me the damage and said it would be three months. He later spoke to Ricardo the surgeon, who was viewing my MRI scan, and rang me five minutes later. He then told me it was probably going to be the end of my season.

“The timescale was then out of the window as the operation then had to be done within five days and if it’s wasn’t successful, it would be the end of my career. I spent a lot of time disappointed, cursing my luck and thinking what could have been. At the end of the day, I’ve moved on with my life now and can look back very fondly at my professional career.”

ON HIS NEW PROFESSION…
Now plying his part-time trade at Darlington 1883, Syers’ day job is as an accountant, which is no surprise given the intelligence he displayed during his time at the club.

He said: “I was playing in the Conference North, at the same level, before I turned professional and the difference from then to now is a bit frightening really. There are seven or eight full-time teams in the league now. We did really well last season and got into the play-offs but due to ground requirements we weren’t allowed to partake in them, which was disappointing because I’ve never experienced them in my career.

“Some lads have to stay around football and scratch around for their next contract because they don’t want to think about the next part of their lives and the idea of not being a footballer. For me, I was never planning to be a professional footballer and I came into the game late, so it was easier for me to think about it from a more balanced point of view.

“The way my last couple of seasons had been, it was apparent that my future wasn’t going to be in the professional game. I’ve got a young family, so I had to think about the long-term side of things. Moving into the accountancy profession, while still being able to play on a part-time basis was the right move.

“It’s certainly full-on. I’m in full-time work and then I’ve got football as well and within accountancy I have to sit exams to become chartered. I’ve just gone past the half-way point of those with two more coming up (these were in December just gone). It’s great to be feeling like you’re moving forward in a career, whereas in football you know that no matter what, you’re going to come to a grinding halt.” 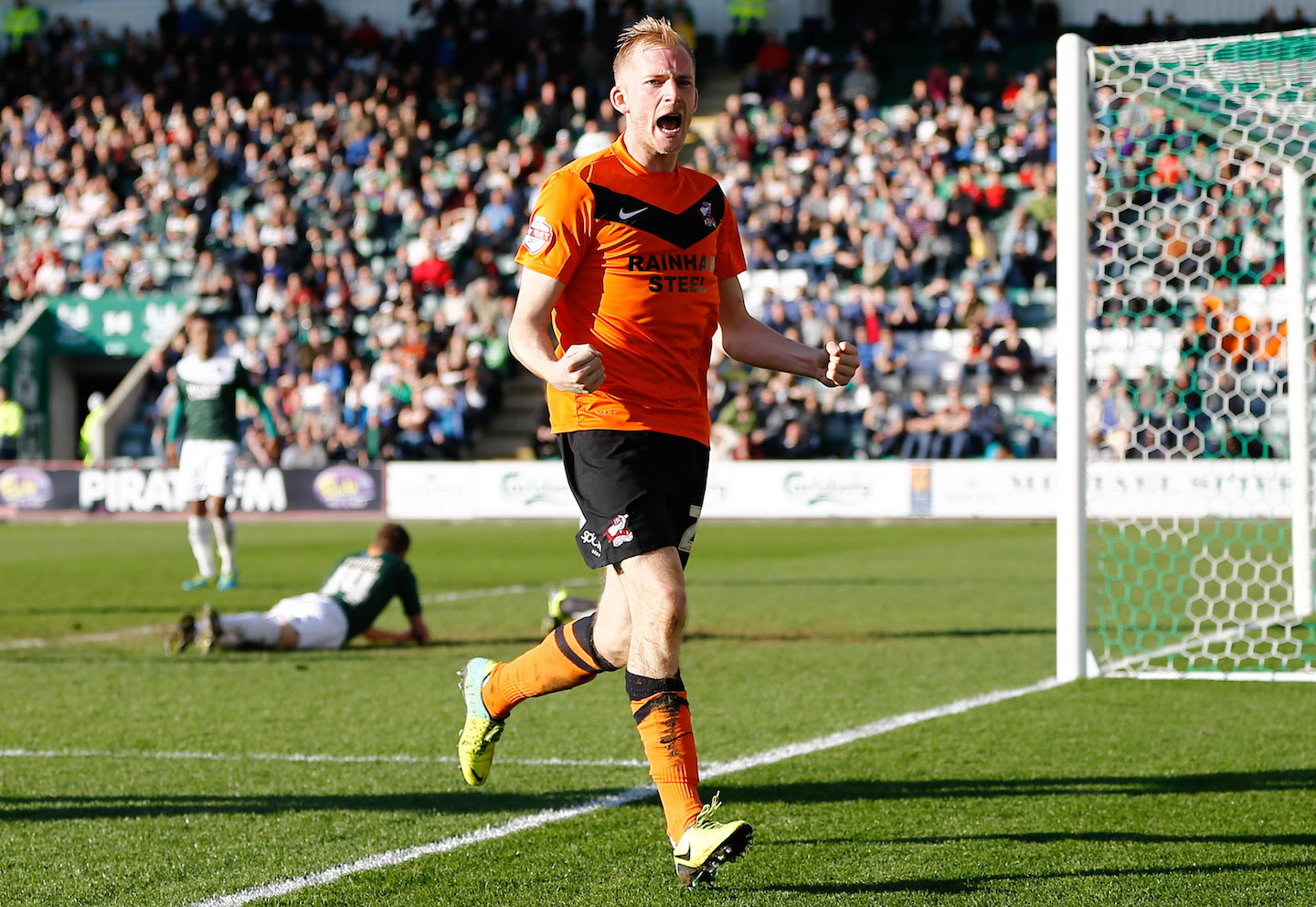 *Only partial data from non-league career. Does not include pre-Bradford City or post-Guiseley in 2016