The Iron will play the first of three home matches in quick succession on Tuesday night, when Oldham Athletic visit the Sands Venue Stadium (7pm kick-off).

United take on the Latics this midweek before a home encounter against Southend United on Saturday, and then the visit of Bradford City next Tuesday night.

They come into it looking to bounce back from two 2-0 defeats against high-flying Cheltenham Town and Exeter City in our last two home fixtures.

Scunthorpe drew 1-1 at Leyton Orient at the weekend in a game they were unfortunate not to win, and will be seeking the full three points for the first time in a fortnight when Keith Curle's side come to town.

A win could send Neil Cox's 18th-placed side up to 15th, while Oldham are a place above on goal difference and could climb to the same position.

Centre-back Harrison McGahey faces around three-to-four weeks out with a thigh problem, while fellow defender George Taft continues to miss the next two months with an ankle injury, which effectively rules him out for the remainder of the season.

Emmanuel Onariase continues to miss out with a groin problem but has returned to training this week and will continue to be assessed.

The former led Northampton Town to promotion from League Two last term but left in February after a poor run of form left them 23rd in League One, while Kewell left after seven months in charge.

The Latics drew 0-0 at Port Vale in Curle's first game before a 4-2 home loss to Cambridge United on Saturday.

Former Iron attacker Bobby Grant is amongst the former United men in their squad, joined by former goalkeeper Ian Lawlor (who tops their appearance tables with 30 league starts), defender Cameron Borthwick-Jackson and forward Conor McAleny. All four have been mainstays in the side.

The latter of those players tops their scorer charts with 12 strikes to his name, while Dylan Bahamboula is also one to watch with eight assists and three goals.

Jacob Bedeau and Kevin van Veen struck the goals as we won 2-0 away at Boundary Park back in November.

The two sides drew 2-2 in this corresponding fixture last season, as Matthew Lund and van Veen scored with the team coming from behind to claim a point. 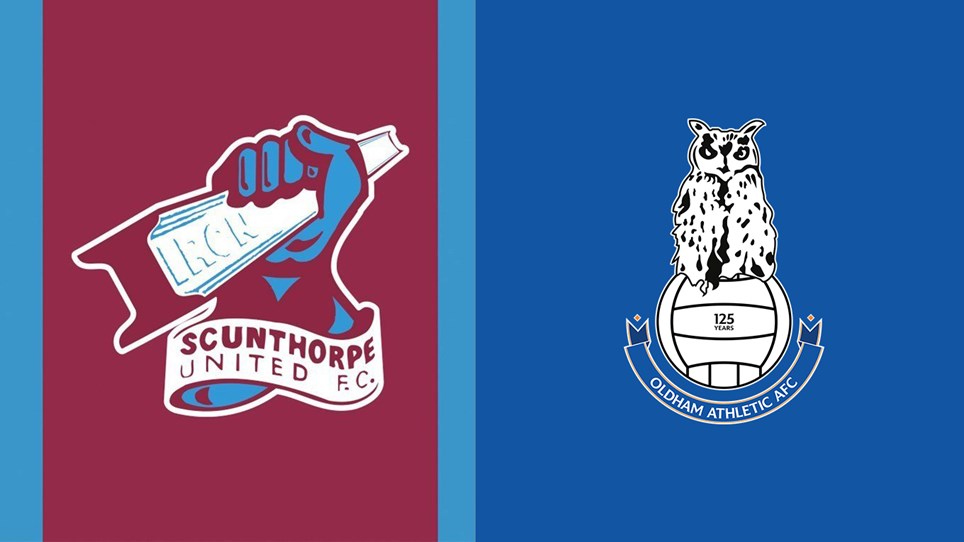 
The Iron's Sky Bet League Two clash at home to Oldham Athletic, which was postponed recently due to a waterlogged pitch, has been rearranged for Tuesday, March 16, 2021.

Substitute Jordan Hallam scored a stoppage time equaliser as the Iron drew 1-1 at home to Oldham Athletic at the Sands Venue Stadium on Tuesday night.

The Iron entered the fixture making two changes from the side that drew 1-1 at Leyton Orient three days earlier, as Lewis Spence and Devarn Green came in for Alfie Beestin and Hallam.

Green almost nipped in soon after kick-off following a loose pass but the visitors kept possession.

Two minutes later there was a superb diving header from Jai Rowe in the Iron six-yard box as the Latics broke the offside trap down the right before the ball came into the box where Dylan Fage was lurking.

There was then a chance for the Iron, with Green denied by goalkeeper Laurie Walker. Spence picked up the ball and played forward to Green, who drove at his man before forcing the save.

Oldham then counter-attacked at the other end down the left with Rowe intercepting the low cross before the Latics were caught offside on the right channel soon after.

After eight minutes, the Iron won the ball back on halfway and looked to drive forward with Spence bringing the ball into space before looking to slip the ball to Green on the left. Oldham intercepted and came away with possession.

In the 12th minute, Ryan Loft’s persistence saw him maintain possession on the edge of the box to find Green. His cross searched for Gilliead who looked to chest the ball down before Oldham cleared.

Soon after, Gilliead turned on the right and drove forward before feeding across the edge of the area. Loft looked to dummy to Green but the defender read it and intercepted.

On 16 minutes, Jem Karacan was involved as the Iron won the ball back before Gilliead got forward and played into Green. He drove into the area but a last ditch tackle in the area took the ball from him.

With 20 minutes gone, there was good build-up by the Iron as the ball was played down the right to Rowe. He slipped in Gilliead with his cross turned behind for a corner. From it, there was a chance for the Iron as Kevin van Veen’s corner was headed towards goal by Gilliead, with Green flicking the second ball over the bar from close range.

Just a minute later, handball shouts were turned down as Junior Brown’s cross from the left was charged down. Jacob Bedeau was left on the deck as the corner came into the box. The Latics headed away for a throw-in.

Not long after, at the other end, Dylan Fage curled a long range effort wide of the target for the visitors after they won the ball back in the Iron’s final third.

Just before the half hour mark, there was superb play from Loft as he nipped in front of his defender and stole possession. Loft was in on goal, but for some reason the assistant Alan Clayton was flagging for a free-kick to Oldham.

Green nipped in to steal possession on 33 minutes and looked to break forward but was brought down, meaning a free-kick to the Iron. Van Veen sent the free-kick into the box, with Loft making first contact. Oldham's ex-Iron loan striker Conor McAleny lashed out of play for an Iron corner, which the visitors managed to clear as far as Spence, who sent a long range effort over the crossbar.

At the other end, Alfie McCalmont was fed the ball from the left channel and managed to squeeze a 25-yard effort through the bodies. It didn't trouble Mark Howard though and bobbled wide.

With 36 minutes gone, Spence got the ball in an inviting area but played to Brown who took one touch before lashing towards goal, drawing Walker into another good stop.

Then, Loft was dragged all over but still managed to win the header. The loose ball dropped for Green who looked to flick in van Veen, but Walker won the race to the ball.

There was a Scunthorpe change shortly after as Karacan was replaced by Beestin.

Oldham were then awarded a contentious throw down the left and took it quickly with Bedeau diverting a shot over the bar for a corner to the Latics. Their players crowded the referee wanting a penalty after a player went down in the box. Clarke nodded the ball out for a corner and thought he was fouled in the process too. Van Veen cleared the subsequent set-piece from the right.

During the one minute of stoppage time, Fage peeled away at the back post, but Howard saved his header from a Latics free-kick.

The second period saw a quick start from the Iron as Rowe surged down the right before Beestin nipped in on the loose ball and won a free-kick. Van Veen delivered it to Clarke, who won the header but was penalised for a foul on Nicky Adams.

The Latics took the lead moments later though, after they were awarded a corner on the far side, despite it looking as though Rowe’s tackle saw the ball ricochet off the Oldham player. From the corner, McCalmont drove in the opener from the edge of the area.

United looked to respond right away, and Gilliead broke the offside trap down the right side, before playing in a low ball for van Veen, but the visitors hooked the ball clear for a throw.

In the 58th minute, Green was fed the ball down the left, drove at his man and won a corner as his cross was turned behind. Carl Piergianni headed away the corner.

Seven minutes later, a loose clearance from Walker allowed Green to put in a cross from the left, but the away defence cleared for a throw. Receiving the ball after it was cleared, Clarke tried his luck from a long way out, with Walker spilling the effort before gathering at the second attempt.

Winning a free-kick on the left, the ball dropped to Beestin following an initial clearance by the Latics. His effort was blocked by a defender as Oldham got the ball forward.

Van Veen next to draw Walker into a save in the 69th minute as he drilled in an effort from the right side of the area.

He soon came off to be replaced by John McAtee two minutes later.

With 73 minutes played, McAtee’s cross was controlled and turned goalwards by Green. His effort took a deflection, hitting the bar and going for a corner.

Five minutes later, Gilliead forced the ball towards goal following a good cross from Green on the left, but Walker again pushed the ball around the post for a corner.

There was a double United change in the 79th minute when Rowe and Spence made way for Teddy Howe and Hallam.

Minutes after coming on, Howe drove forward down the right channel to win the Iron a corner, but nothing came from it.

With minutes left, Brown’s effort was blocked before Loft hit one from range, almost wrong-footing Walker, but the ‘keeper made another save.

Howe then played the ball into McAtee down the right, who hung up a cross which was headed away for a corner as the fourth official indicated five minutes of added time.

In the third of those, United levelled the scores as Brown’s cross from the left was met on the volley by Hallam to send the ball into the net for his second goal of the season.

Soon after, Loft played in Gilliead down the right, with the shot turned behind for a corner, as United chased a winner.

The Iron then stored forward again with Green cutting back for Bedeau, who flicked at the ball, but it went wide of the far post as the game ended all square.

Scunthorpe return to action on Saturday when they host Southend United (3pm kick-off).


The Iron's Sky Bet League Two clash at home to Oldham Athletic, which was postponed recently due to a waterlogged pitch, has been rearranged for Tuesday, March 16, 2021. 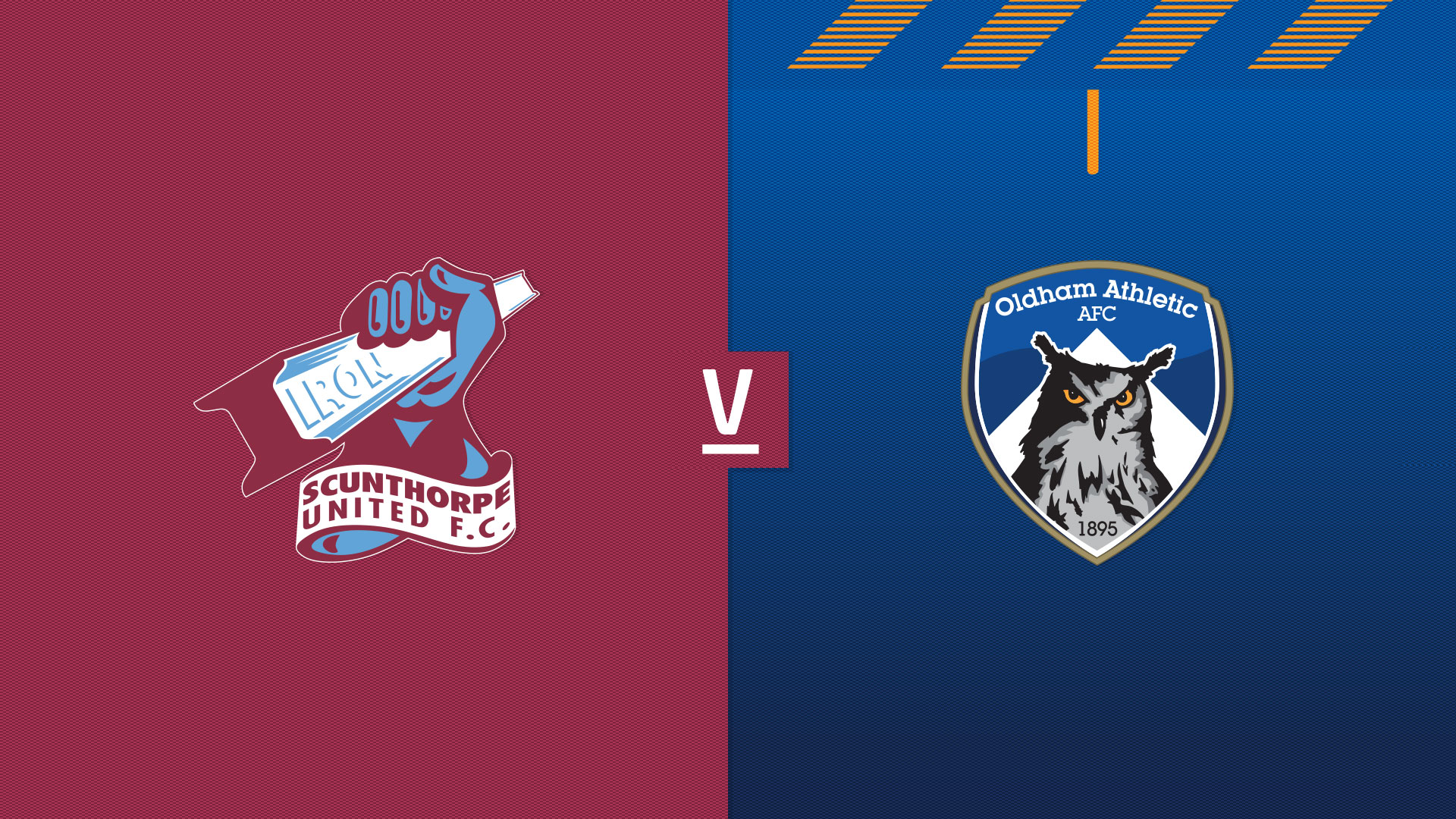 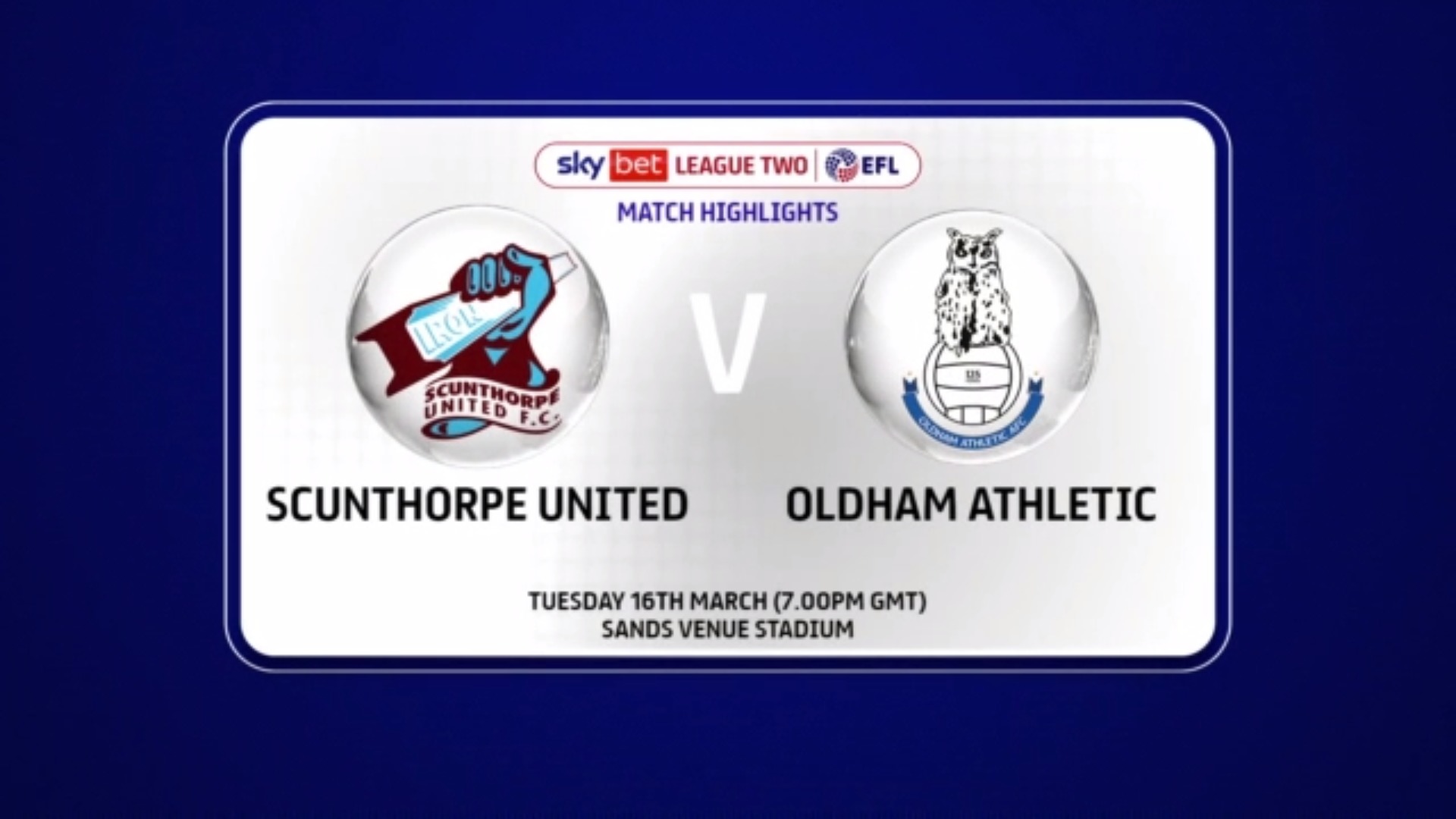 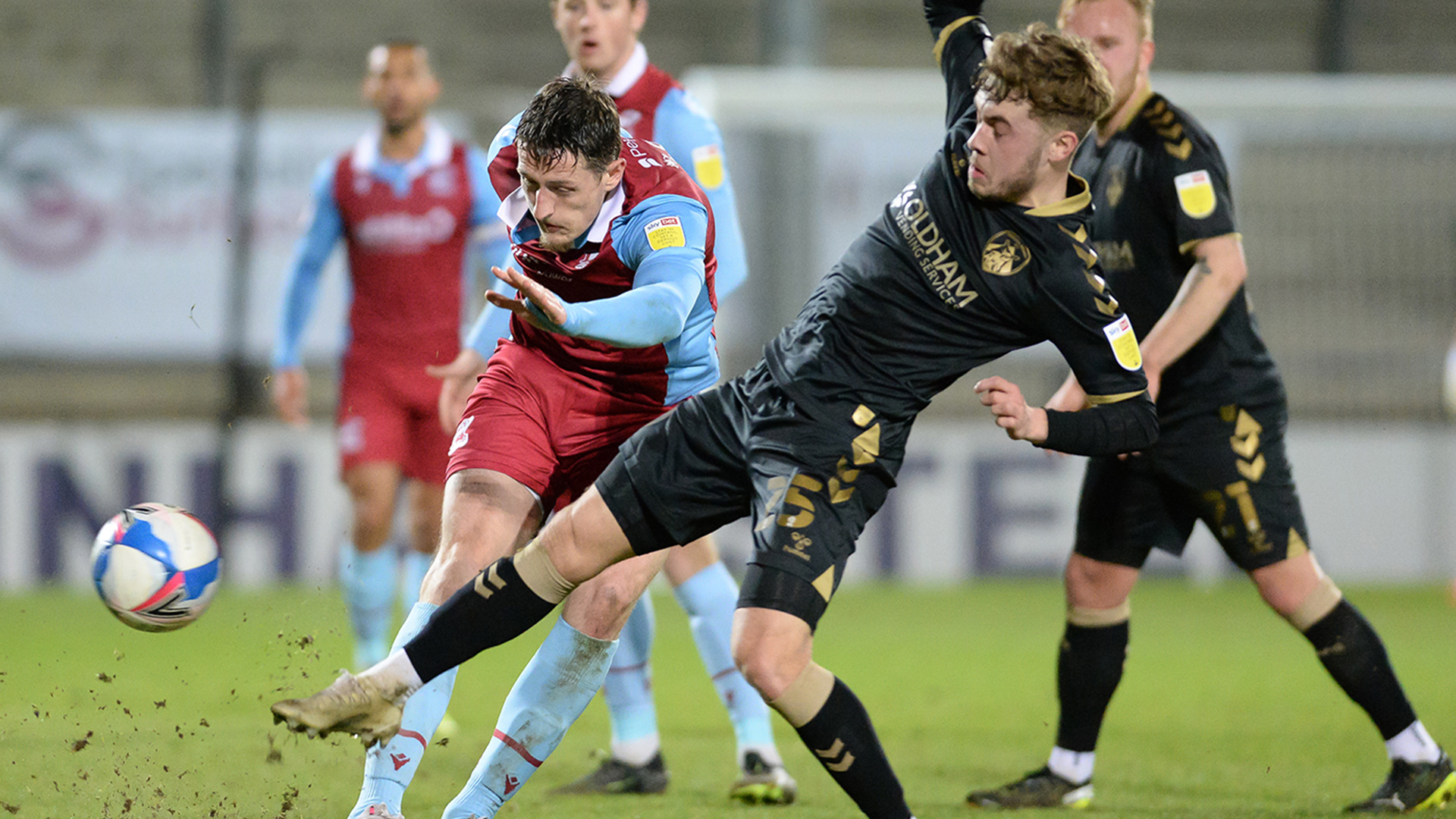