The Iron will be looking to bounce back from two successive defeats when they visit league leaders Cambridge United on Tuesday night (7pm kick-off). 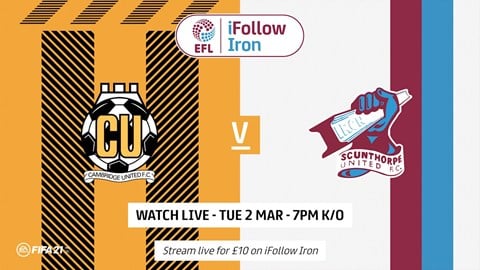 Though they certainly had the chances to get more from the game, the Iron were defeated 2-0 at home by third-placed Cheltenham Town on Saturday.

That followed a 2-0 loss at Bolton Wanderers last midweek, in a match during which a penalty decision going against the Iron played a key part.

Prior to then, Scunthorpe had won four in a row and will be seeking to return to winning ways at the Abbey Stadium.

George Taft came off against Cheltenham with an ankle injury in the sixth minute, and the club are awaiting the results of a scan on the former Cambridge centre-back, but first team manager Neil Cox anticipates he'll be out for "six-to-eight weeks at best".

Forward Ryan Loft was brought off as a precaution with a hamstring problem and will be assessed before the game, as will Emmanuel Onariase (groin) and Abo Eisa (hamstring).

Mark Bonner's side have set the tone in the division from the very start and lead the table at present.

They were late 1-0 victors at Port Vale on Saturday, with former Iron loanee Liam O'Neil scoring a stunning late winner.

The U's are without a win in their last two home matches though, having lost 1-0 against Cheltenham last Tuesday and drawn 0-0 at home to Southend United earlier last month.

Paul Mullin's goals have played a huge part in the success so far this term, with the striker netting 22 times. Fellow forward Joe Ironside has notched on 11 occasions.

Wes Hoolahan has been rolling back the years in midfield and set up six goals, as well as scoring four himself. The 38-year-old former Norwich man has made 23 appearances so far.

The appearance tables are topped by defenders Greg Taylor and Kyle Knoyle on 32 league starts apiece. 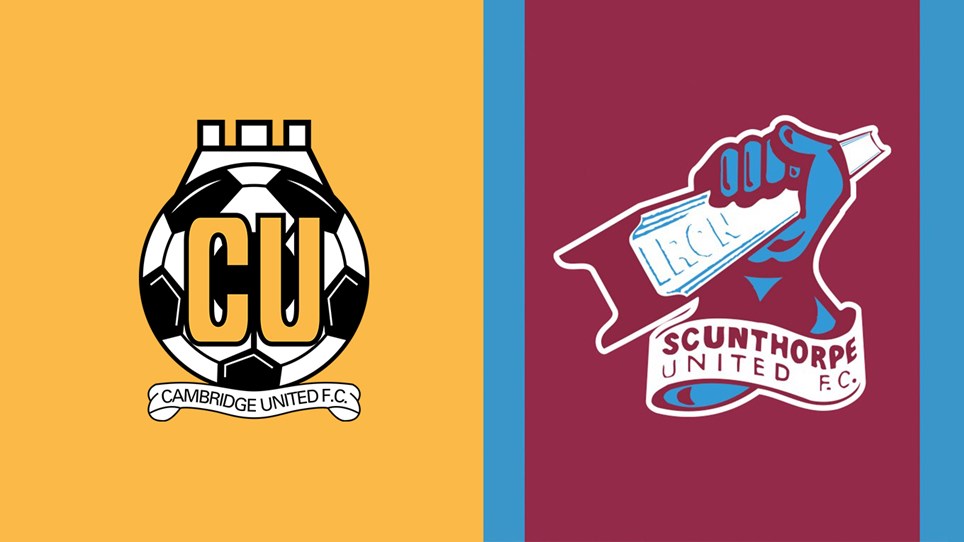 
The Iron’s away League Two game at Cambridge United on Tuesday, March 2nd will now kick-off at 7pm.

After the side defended resolutely throughout the game, the former Doncaster midfielder netted the decisive goal.

With two minutes gone, Paul Mullin sent a half-volley wide of the target from the left side of the area as the ball was knocked down into his path.

With eight gone, Kevin van Veen chased the ball back to the Cambridge goalkeeper as the Iron defended a couple of balls into the box with Bedeau clearing a low cross into the area.

11 minutes in, the Iron forced the hosts back towards their goalkeeper and pressed the ball, with the ball signalled to have gone out for a corner.

After 12 minutes, the hosts came forward on the right side before playing a pass into the area. Mullin laid it off to Kyle Knoyle, with his shot taking a deflection for a corner. Scunthorpe then defended two corners with Brown heading away the second.

The 14th minute saw a superb instinctive save from Mark Howard as a looping ball was heading under the crossbar. Shilow Tracey was there to power in the rebound but Howard made a fine stop.

Straight after, Howard made another superb stop as he spread himself after Harrison Dunk got in on the left side.

With 18 minutes gone, Knoyle got some space on the right side of the area and powered in a low ball across the goal and wide of the target.

A minute later, a loose ball found its way to van Veen who shimmied past two before the third defender got a touch on the ball to take it away from the Dutchman’s control. Soon after, at the other end, Bedeau did really well to shield the ball out of play under massive pressure from Mullin.

Midway through the half, Howard saved from Declan Drysdale as the central defender swung a left boot at the loose ball following a Cambridge corner.

With 26 minutes played, Green and van Veen chased down the Cambridge back line once more with the latter intercepting a pass and the hosts looked to play out from the back.

Then, Jordan Clarke and Alex Gilliead did well on the nearside to win a goal kick. Mullin screamed at the official for not giving a corner and ran towards him, but the forward escaped punishment.

On 29 minutes, Eisa got space to move down the left with the cross into the area looking for van Veen, but the home defence headed away from danger.

Three minutes later, former Iron loanee Liam O’Neil came charging in looking for a header which Clarke got a slight touch on. Bedeau then did well to head up and over from the next cross for a Cambridge corner. Brown headed away the corner before Bedeau deflected a later cross into the path of Howard who grasped hold of the ball.

Van Veen sent a free-kick to the back post in the 37th minute, as Harrison McGahey hooked the ball into the area, with Clarke winning the loose ball on the edge and shielding for van Veen who sent a long range effort over.

After 41 minutes, Devarn Green and Jem Karacan tracked back to win the ball back with the pair linking together down the left before Green slipped Eisa into the area. He sent in a low left-footed cross, but the ball was cleared.

A minute later, Gilliead shielded and played out to Karacan. He passed to Green, who was in behind, breaking the offside trap. He searched for Eisa with the cross but the ball was cleared for a throw.

During the minute of added time at the end of the half, Beestin did well on the edge of the box before slipping Eisa down the left side. His cross went just wide of the far post though.

At the start of the second period, Mullin curled in a left-footed cross from the right side of the area, with Howard grabbing hold of the ball as Ironside came in at the back post.

With 50 minutes on the clock, Gilliead did well on the far side as he surged beyond the full-back before seeing his cross deflected behind for a corner.

Two minutes after, Mullin controlled a second ball following a goal kick from Callum Burton. He fired goalwards from 30 yards but his effort went over the bar. Immediately after, the referee played a good advantage in favour of the hosts as they shifted the ball to the left. The cross came in to Tracey, who headed wide of the target.

In the 56th minute, the Iron defended a corner and hooked clear to half way. as McGahey did well to defend and shield the following ball into the penalty area out for a goal kick.

Just before the hour mark, Cambridge won a free-kick on the edge of the area, which Jack Iredale took. He placed the ball towards Howard’s bottom right corner, but the Iron shotstopper got down well to push the ball around the post.

Following that, the Iron cleared the corner before Dunk saw his shot cleared. Brown looked to have been pushed as play continued with Joe Ironside climbing above Bedeau to head the ball goalwards with Howard making the save.

The first Scunthorpe change was made in the 64th minute as van Veen was replaced by Spence.

After 65 minutes, Mullin was dinked into space down the right side of the area, with Bedeau coming across to block his shot for a corner. Then, Brown headed away at the near post under pressure from O’Neil who was penalised for a foul after the ball had gone.

There was then good defending from Bedeau as Mullin looked to flick the ball over him before getting in on goal. Bedeau stood his ground, allowing Howard to gather.

As the home side's pressure continued, Mullin peeled away on a cross-field ball on the right before driving a shot across goal and wide of the target.

On the next attack, Ironside threw himself down in the Iron penalty area, but the referee was unmoved following appeals from the home side.

Shortly after, Bedeau went down and required treatment, and was soon replaced by Jai Rowe, who slotted in at right-back as Clarke moved across to central defence.

In between those moments, the hosts moved the ball to the right side with Tracey firing a low effort across goal and wide.

Scunthorpe took the lead though in the 79th minute as Green seized on the ball before advancing forward and slotting Beestin into the area. He fitted between two defenders before slotting across goal and into the net for his third goal of the season.

Five minutes later, Myles Hippolyte came on for Green, who was down and in need of treatment.

With two minutes left, Rowe played the ball over the top for Gilliead who did brilliantly to keep hold of the ball and then win a corner. Hippolyte and Gilliead worked the corner, with the latter getting free before rolling the ball across for Eisa, who saw the ball cleared away for a throw as he ran onto the ball.

There were seven minutes of added time given and the first saw superb play by Rowe, as he went in for a header with Tracey and was fouled, resulting a pressure-relieving free-kick to the Iron.

Five minutes into it, Clarke then headed away a free-kick before Karacan slid in to send the ball out for a throw.

There was then more great play from Rowe as he got close to his man as he took down the ball inside the area before blocking the cross, gaining a double ricochet and resulting in a goal kick.

The hosts carried on the pressure but the Iron held on for three important points.

United return to action on Saturday when they visit Salford City (3pm kick-off).


The Iron’s away League Two game at Cambridge United on Tuesday, March 2nd will now kick-off at 7pm. 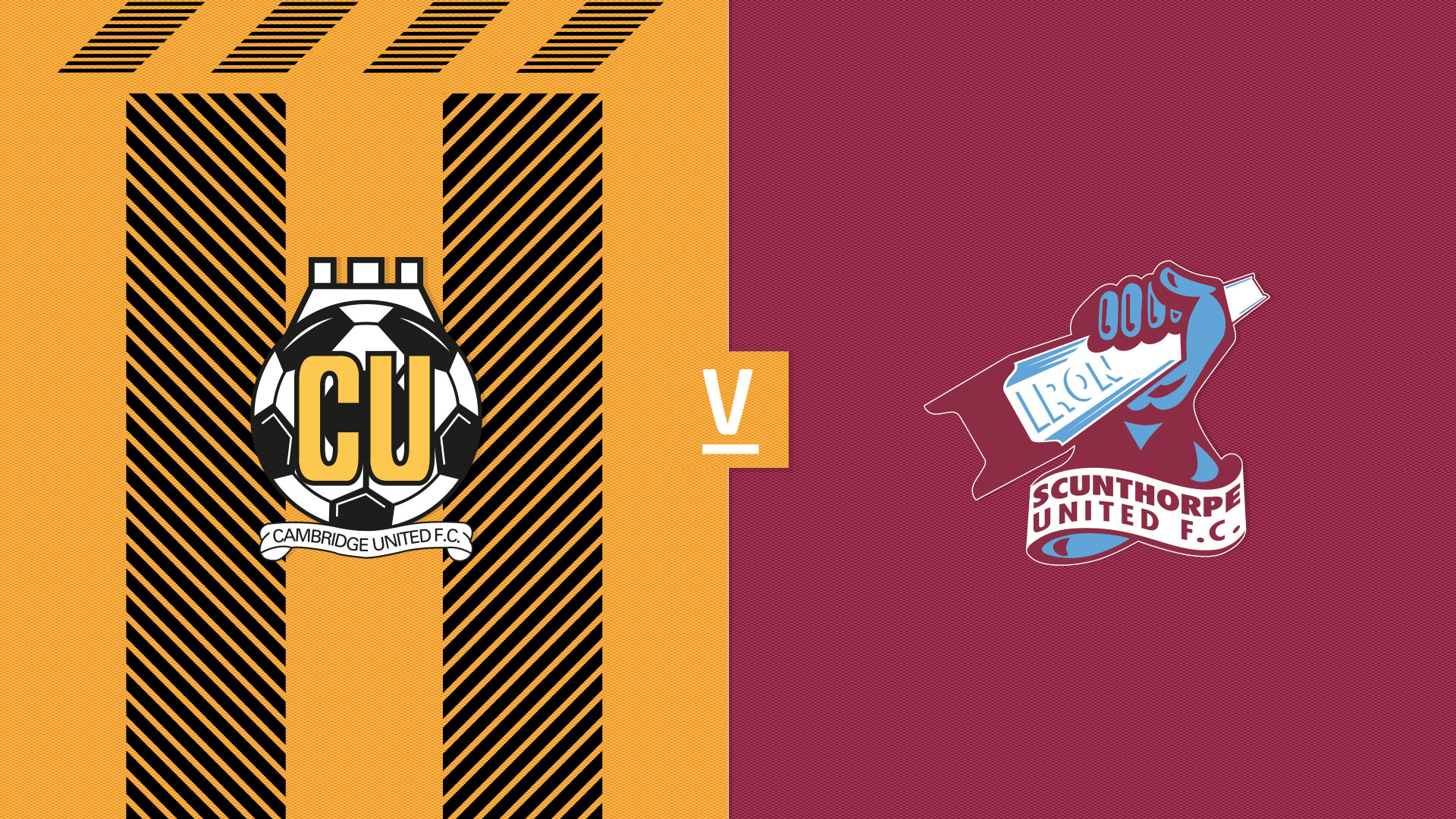 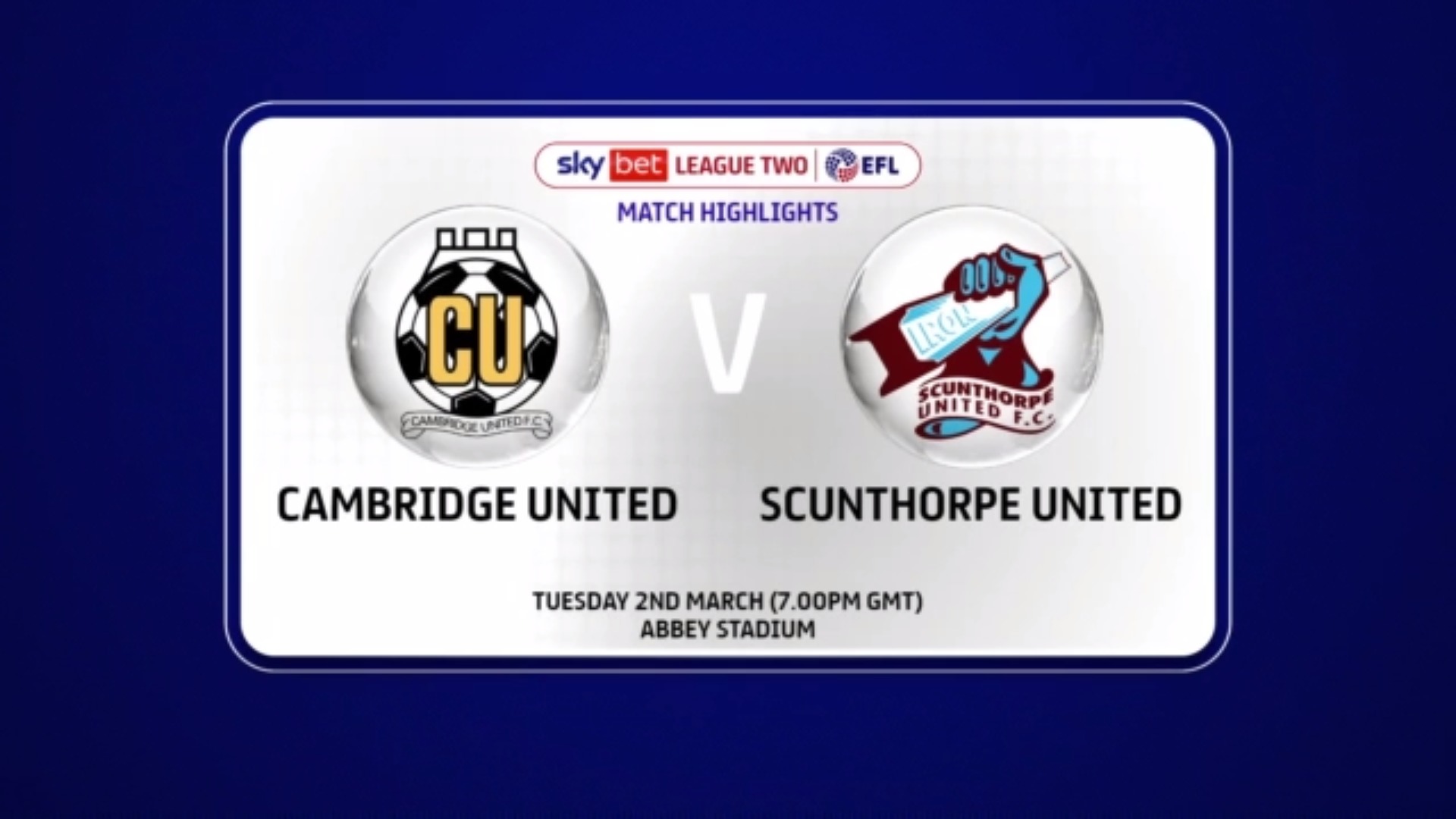 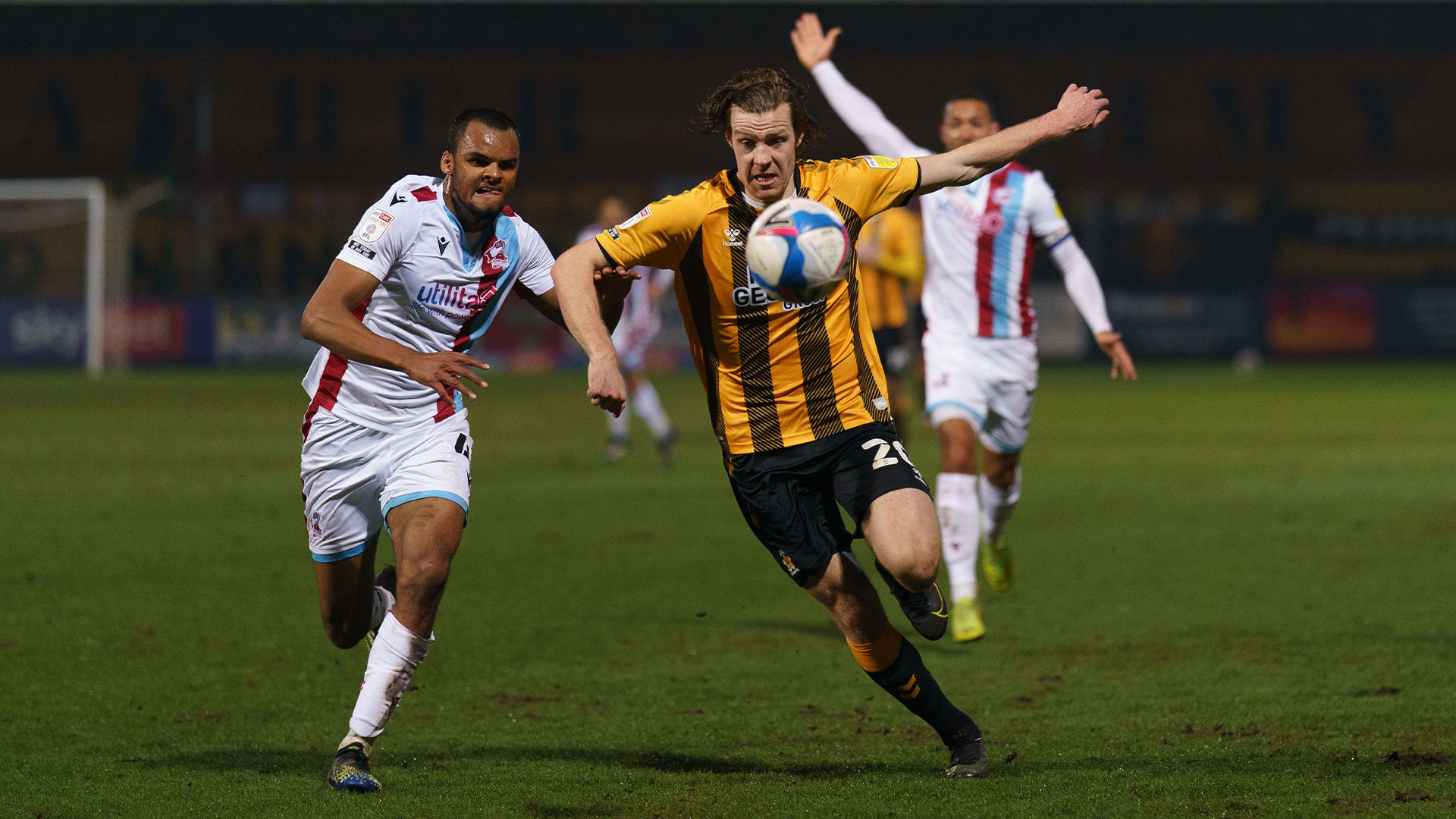