The Iron will be seeking to double their points tally in Group H of their Checkatrade Trophy campaign on Tuesday night when Grimsby Town visit Glanford Park (7.45pm kick-off).

A further derby encounter against Doncaster Rovers (away) follows at the end of the month, but victory would confirm United's progression to the next round of the competition.

Should Rovers also triumph against Sunderland U21s, the Black Cats and the Mariners will both be eliminated from the trophy with one group match still to play.

TEAM NEWS…
United manager Graham Alexander indicated in his pre-match press conference that he will once again make changes, as he did for the Sunderland U21s encounter in August.

Andrew Crofts is cup tied after playing for Charlton Athletic in their first group stage game, while Charlie Goode, Luke Williams and Jonathon Margetts will continue to sit out with their respective injuries.

PAST MEETINGS…
The two sides last met in the FA Cup in 2013 when Grimsby Town went through to round two following a replay at Glanford Park.

The initial fixture at Blundell Park was goalless before the Mariners won 2-1 ten days later.

ONE TO WATCH…
Grimsby manager Russell Slade stated in his pre-match press conference that he will make wholesale changes for the game, but will start Harry Clifton and Karleigh Osborne.

Osborne, 29, played for Brentford between 2005 and 2012 making 161 appearances. He also played for Millwall and Bristol City, amongst others, before arriving at Blundell Park in July. The central defender is in line to make his fifth appearance for the club.

The Iron picked up another three points in the Checkatrade Trophy with a 2-1 win over local rivals Grimsby Town. 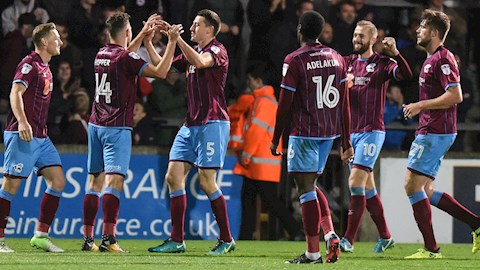 United fell behind in the 32nd minute, but Tom Hopper drilled home an equaliser to tie the game up at 1-1 a few minutes before the break.

In the second-half, Hopper doubled his tally to win the game for his side, when a Kevin van Veen header got a touch off his fellow forward.

Graham Alexander made seven changes to the starting eleven for the game, which included goalkeeper Rory Watson making his second competitive appearance for the Iron. Murray Wallace was named as the captain.

The first chance of the game came in the 10th minute. Hakeeb Adelakun played it to Sam Mantom, who struck a shot straight at Ben Killip in the Grimsby goal from outside of the box.

The visitors were next to have an attack. A corner was met by Harry Clifton, driving a shot towards goal, but Levi Sutton blocked it, before Diallang Jaiyesimi fired his attempt wide of the goal.

They were on the attack again five minutes later. Tom Bolarinwa powered forward for Grimsby, finding JJ Hooper in space inside the box, but his effort, from an angle, flew over the crossbar.

It wasn’t until the 27th minute for the Iron’s next chance to come about. Lewis Butroid crossed from the left, which went slightly behind Paddy Madden, but the striker swivelled and volleyed the ball. However, his goalbound effort was blocked and went out for a corner.

From the resulting set-piece, Cameron Burgess steamed through at the far post, firing a bullet of a header just wide of the goal.

Although, it was Grimsby who took a 1-0 lead in the 32nd minute. Jaiyesimi received the ball and broke into the box, shifted the ball onto his right foot, going past one United defender in the process and then placed a shot beneath Watson to score.

There was nearly an instant response from the Iron. Adelakun took the ball forward and went for goal in the centre of the pitch, but his powerful strike went wide of the right post.

The Iron did find an equaliser in the 43rd minute courtesy of Hopper. Kevin van Veen curled a shot goalwards, which was parried by Killip and it fell to Hopper 25 yards out. The striker controlled it and drove a shot, with his right foot, into the bottom left corner to make it 1-1.

Butroid nearly found another goal one minute later. The ball dropped kindly for the young full-back and he sent a dipping volley just over the bar from 30 yards out.

After the interval, Adelakun was provided with a fantastic opportunity. Van Veen threaded a brilliant ball to the winger, who advanced on goal, trying to put it past Killip, but the goalkeeper got down quickly to save his shot.

Van Veen was involved in another Iron attack in the 53rd minute. He held the ball up well and played it across the box to Madden, who half-volleyed it at Killip to save.

The Iron defence were given a scare at the other end. A cross was met by the head of Harry Clifton, with the ball going inches over.

That didn’t stop United in their search for a second goal when Adelakun crossed for Madden. The Irishman’s header was expertly tipped over by the Grimsby goalkeeper.

Mantom was next to go close for the Iron. His first attempt was blocked, before he drilled his second wide of the left post.

The midfielder had another go moments later from further out this time. Struck with power, the ‘keeper fumbled the shot before pouncing on the loose ball.

In the 80th minute Hopper got his second of the game to put the Iron 2-1 up. A corner was half cleared by Grimsby, but van Veen headed it back towards goal, with the ball flicking off Hopper’s head into the back of the net.

That goal was the final big action of the game, with the Iron recording their second win in the Checkatrade Trophy.

Tickets are on sale for the Iron’s home Checkatrade Trophy clash against Grimsby Town.

The Mariners travel to Glanford Park on Tuesday, October 3rd, 2017, with the match kicking off at 7.45pm.

It is our second group game of the tournament, after a 3-1 home win over Sunderland Under-21s, with an away game at Doncaster Rovers to follow in late October.

Iron fans using Turnstiles 2A and 2B of the Britcon Stand, and Turnstile 4A of the Clugston Stand are able to pay on the gate.