The Iron will play the second of four home matches in quick succession on Saturday, when Southend United visit the Sands Venue Stadium (3pm kick-off). 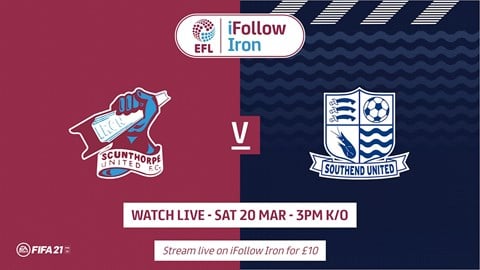 The Iron come into the game off the back of three 1-1 draws in their last four goals after Jordan Hallam's stoppage time equaliser in midweek.

Jordan Hallam restored parity for United in the third minute of five added onto the end of the game against Oldham Athletic in a game which saw the side register 19 shots on goal.

Southend United come into the game second from bottom in the division with 30 points to their name from 35 games this season.

The side have scored 21 goals and conceded 49 so far this season. Scunthorpe lost the reverse fixture 1-0 at Roots Hall in December in the only game the Iron have played in front of a crowd this season - only their second win of the season at that stage.

Shaun Hobson has played the most minutes for the Shrimpers this campaign having played 2,796 minutes, while Elvis Bwonomo has played 2,720. Tyler Cordner, who started the season on loan with the Iron from AFC Bournemouth, has played 451 minutes, starting five games and being a used substitute once.

Midfielder Jem Karacan (knee) came off against Oldham and will how he reacts after taking part in training on Friday will be assessed before a decision is made on his involvement at the weekend.

Scunthorpe took maximum points the last time the sides met at the Sands Venue Stadium, back in March 2019. Tom Pearce, Tony McMahon, George Thomas and James Perch all netted as the Iron came from 1-0 down to win 4-1.

Overall, the two sides have met 58 times, with the Iron winning 25 of those, whilst Southend have won 18 games.