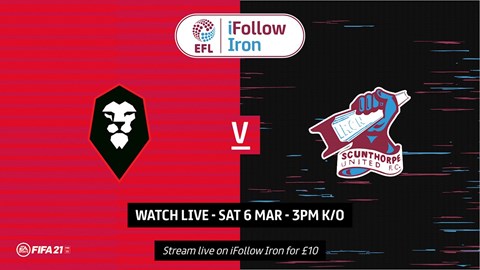 Alfie Beestin’s late left-footed strike meant the side left Cambridgeshire with maximum points, despite the hosts largely dominating the game.
Speaking to iFollow Iron, the shot-stopper reflected on the midweek triumph, saying: “The performance wasn’t amazing, but we showed great discipline within the game and, with how hard we fought, we deserved to take something out of the match even though it was a bit of a smash and grab.
“I think it showed how much grit and determination is in the team. To go away to the league leaders, it was always going to be a tough game. We shouldn’t have expected much else other than to go there and be dogged, disciplined and put our bodies on the line.
“For me, as a goalkeeper, it’s hard to affect a team performance, but it was encouraging to see how many people wanted to get hurt to stop the ball from going in.”
United had established a settled back five, including Howard in between the sticks, which had culminated in four straight wins and three clean sheets, with the team not conceding a goal in open play for 466 minutes.
A couple of injuries in recent games has led to alterations in that defensive rear-guard, which means it has been all the more pleasing to maintain that solidity at the back.
“We have got a lot of players that can take over when needed and when called upon, and I think we’re showing that the squad that we’ve got has players that can come in and add slightly different dynamics to the team,” he continued.
“We knew that we had a few tough games coming up, so it was pleasing to get a win after two losses. We have a couple of tricky games coming up and hopefully we can take something out of those. The last three and the next two are all top six or seven teams.
“We’ve won five of our last seven games and that’s an incredible achievement from the squad and staff. We’re on a nice little bit of form and hopefully we can continue that.”
Only one chance was required to take the points in midweek, with Howard praising the outfield players for taking their opportunities in recent weeks.
“I think we’ve got a bit more of a ruthless streak in us from when I first joined and that’s really good to see,” he stated.
“We’re defending and putting our bodies on the line, even if we’re not playing our best. We know that if we create a chance, we’ve got a good chance of taking that and we’ve proved that the other night.”
After returning to Bolton just under a fortnight ago, the 34-year-old returns to another of his former sides this weekend. That was a much more short-lived spell as he arrived at the Peninsula Stadium on a week’s emergency loan, making three appearances for the Ammies.
The one game he did play on home soil was ironically against the Iron, but he’s looking forward to being in the opposing dressing room this time out.
“It’s always nice to go back and play these teams, if you get a result,” he said.
“Obviously I went back to Bolton last week after playing there for a while and not getting the result was hard to take. We put so much into each game as it comes, and Salford will be the same. It’ll be a tricky game and we might not to be able to play our best football, but we have to show a lot of discipline within the game.

“There’s a lot of pressure on them and Bolton this year, and a lot has been said about their squads and budget, but we can only affect this game coming up.”

See much more from Mark Howard on iFollow Iron. Click here to get your Salford vs Iron match pass.