Forward Abo Eisa has reflected on Saturday’s tough game, which saw the Iron draw 1-1 away at Salford City. 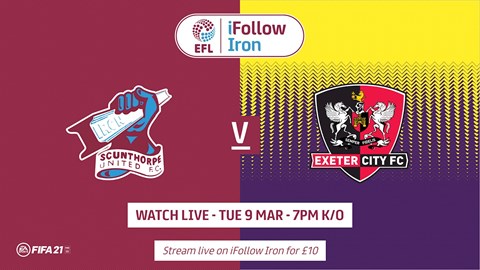 The 25-year-old scored a first-half penalty (his seventh goal of the season) that cancelled out the opener from Tom Clarke.

Speaking to iFollow Iron, he said: “It was deserved, the boys worked hard today so I feel like we deserved to get something out of the game. I saw the opportunity (to win the penalty as he was fouled); I thought the ball wasn’t going to go out of play but if I can nip in behind, we have a chance. I was brought down, got the penalty and I knew that I’d score once we got it.”

He added: “It is nice (to score) and it helps the team get another point today. We’ve not had too many box entries so in training, we’re working hard to get more, and to try and be more attacking away from home. Sometimes it’s difficult but we’re trying to get more runs in behind and force a position to get them to make a mistake.”

Discussing the progression in the team’s performances, Eisa said: “We’re proud to have had two tough away games (at Cambridge and Salford) and get four points. At the start of the season, we probably would have lost those games so it shows how far we have come as a group.

“If we had started the season a bit better who knows where we could have been. These performances are a good step and we’re doing well. We hope to get more wins and draws - from games like today where we need to dig deep.”

He added: “Everyone’s working hard for each other. The more experienced boys are helping the younger boys. It seems like there’s togetherness and everyone, when they’ve been on the pitch, has done well.

“We just need to rack up the points. For the defence, it’s about getting as many clean sheets and for the attack it’s getting some goals."

Eisa has had a change of role in the team in recent weeks, playing more centrally up front at times, and he said: “It’s a different role and naturally I’m a winger. I’ve played up front before but at the end of the day it’s for the team, I’ll fill in there when we need it and try to do as best as I can.

“Higher up the pitch allows me to score more goals like the penalty that we had. If I wasn’t upfront, I probably wouldn’t have been there. There are advantages to it.”

Looking ahead to the next game on Tuesday (7pm Kick-off) against Exeter, he said: “Exeter are always a good team, they’re always in the play-offs every year. It should be a tough game but we’ve done well and we’ve been playing well at home. So hopefully it’s a chance to keep it going.”

See much more from Abo Eisa on iFollow Iron. Click here to get your Iron v Exeter City match pass.