First team manager Neil Cox is hoping to have captain Jordan Clarke available for this Tuesday’s home game against Bradford City after the Iron submitted an appeal following his dismissal at the weekend. 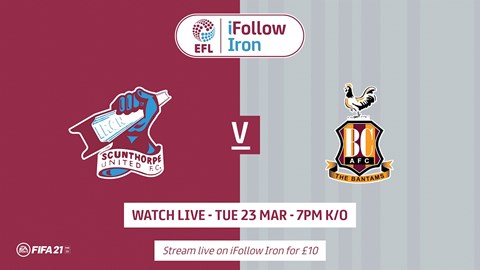 Clarke was red carded by referee Rob Lewis for an alleged act of violent conduct, but in his pre-match press conference on Monday afternoon, Cox told iFollow Iron he’s waiting to hear the result of the hearing: “We’re very hopeful (it will be overturned).

“When we looked back at the video, he just pushes him in the chest. We’ve appealed that and hopefully we can get some good news. I’ve prepared for the game with him and without him and we did a little bit extra on the training ground this morning just in case.

“We just get on with it. If Jordan’s available, we move forward, and if he’s not, we get on with it and play someone else. That’s just the way it is.”

It’s third time lucky for this match after the original fixture was called off due to a frozen pitch before the second game was abandoned after half an hour due to the weather.

With the Bantams the only side the Iron are yet to play this season, the United boss is eager to get this fixture - the second of three games-in-hand Scunthorpe have - finally played.

“We just want to get the game done and then most teams will have played the same amount of games. It’s a big game at us, it’s an opportunity for us to get three points at home against a good Bradford side that should really be at the top end of the league with the squad they’ve got and the size of their football club.

“Tomorrow, it’s about 11-v-11 and what we can do to improve on Saturday’s performance. We still want to be ruthless at the back and defend as a team, but we have to create a little bit more and keep the ball better in the forward areas.”

Both Conor Sellars and Mark Trueman were caretaker managers when the sides faced each other in the abandoned game last month. Since then, they’ve both been installed as permanent managers until the end of the season.

Cox gave testament to the job they’ve done since taking charge: “They’ve done an excellent job, congratulations to them both. I hope they go onto get a good contract out of this because they deserve it.

“They took over at a really difficult time and pushed them up the league. They did some really good business in January and it seems a happy camp there. It’s a good football club and it’s good to see they’re on their way up again.”

There will certainly be changes to the squad this midweek, with the definite absentee being Mason O’Malley as he links up with Republic of Ireland Under-21s. With a few other knocks in the camp, and a potential suspension, there are also likely to be others.

“We’ve got a couple of knocks, so a couple of the other boys will have to come into the squad,” he stated.

“I might have to freshen it up, Mase is away and I hope he enjoys the week as it’ll be a great experience for him. It’s fantastic for him and the football club.

“I won’t pick the side until Tuesday, so it gives us another 24 hours to look at things. It’s about getting 11 players on that pitch tomorrow that are fit and raring to go. Kev (van Veen) is alright - he’s a player that we will look at tomorrow and see how he is. There are a lot of tired bodies, but we have got to get on with it. The boys are all saying they want to play.

“Manny (Onariase) will be in contention. Is he fit yet? We’re not 100 per cent, but if we have to throw him in, he’s raring to go and he will put his body on the line. He wants to defend, but we have to make sure it’s the right time, so that we don’t get him injured again.”

See much more from Neil Cox on iFollow Iron. Click here to get your Iron v Bradford City match pass.