First team manager Neil Cox has previewed the Iron's home pre-season friendly against Championship side Hull City on Saturday and, with the whole squad getting match fitness the priority, a number of players who were on the bench for Tuesday night's win over Burton Albion will start the encounter with the Tigers. 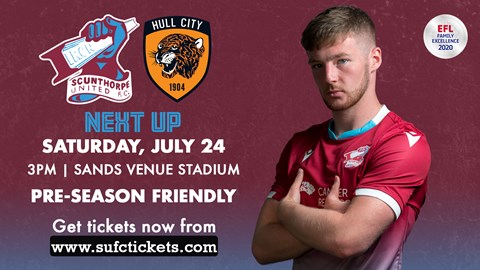 Tickets for the game are on sale right up until kick-off and can be purchased from www.sufctickets.com or by visiting our ticket office. There will be no pay on the gate option available.

Cox told iFollow Iron: "It's a good test for us with a Championship side coming here. I know they're playing two games (Grant McCann's outfit also face Mansfield Town on Saturday) and splitting the teams up but it's about us getting fitness and working on what we have been doing. We want to try and play a little bit more this year. The lads have taken things on board really well. When we got it (against Burton), we created chances and looked threatening. We want to pass with purpose and have worked on it since day one.

"We're going to get minutes into the substitutes from the other night, as everyone needs to be raring to go (for the start of the season in two weeks). I haven't thought about my starting eleven (for the league opener against Swindon Town), it's about getting everybody fit. Some people have surprised me with how well they've done, which is brilliant for me. We have a lot more hard work to do and will keep pushing, and touch wood get no injuries.

"The other three trialists who didn't start (from Tuesday night) will be involved tomorrow against a Championship side and we'll make a decision after that. We want players who can come in ready to go.

"Gally (Dan Gallimore) is the only one who missed out the other night as a precaution with his hamstring. Josh (Robertson) came in from the youth team the other night, who's 16-years-old and trained with us for one day before coming on for 25 minutes. I have to give full credit to the academy. We had six boys who came through our youth system on the pitch the other night and that's great for the club. We're hoping to get another academy player involved tomorrow too."