The Iron will be looking to get back to winning ways and register their first points of 2021 on Tuesday when they play host to Salford City (7pm kick-off). 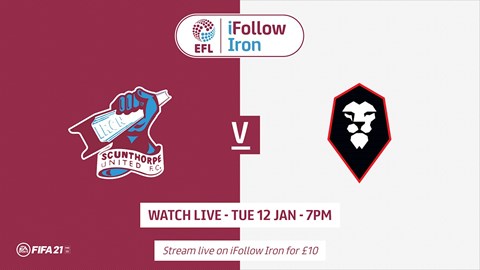 United come into the game having not played at the weekend, with the match at home to Bradford City postponed due to a frozen pitch.

The side finished 2020 with their first win in three matches thanks to goals from Myles Hippolyte and Alex Gilliead at Walsall, but they fell to defeat in their last match 10 days ago, losing 3-1 away at Stevenage.

In that game, Devarn Green scored his first for the club to put the side 1-0, but the hosts hit back soon after.

Salford also had a free weekend having been dumped out of the FA Cup to Newport County in Round Two. The Ammies last played last Tuesday when they lost 2-1 to Mansfield Town.

We sit 20th and could potentially climb up to 16th with victory, while the away side are 8th - 10 points further on - and can go as high as fifth if they claim maximum points.

The opposition were in the caretaker charge of Paul Scholes when this fixture was originally scheduled at the end of October following the departure of Graham Alexander, but it's Richie Wellens who has the reins of the Ammies now, becoming their second-ever permanent manager in the EFL.

He has so far won seven of his 15 games in charge, drawing three and losing five of the other games in what is Salford's second campaign at this level.

The Ammies have three players tied on six goals each at the top of their goalscoring ranks, with the familiar names of Ashley Hunter and Ian Henderson - the latter formerly of Rochdale - and James Wilson with 18 strikes shared equally. Hunter and Henderson also have four assists to their name.

First team manager Neil Cox is hoping to go with the same squad as he would have done for Saturday's postponed fixture against Bradford City, pending the results of the latest round of COVID-19 testing, which took place on Monday.

New arrivals Jem Karacan and George Taft come into the squad for the first time after signing last week on a free transfer and on loan from Bolton Wanderers respectively.

Myles Hippolyte, who netted his first goal for the club against Walsall, missed out last weekend through an ankle injury sustained against the Saddlers and returned to training on Friday. He continued training on Saturday and Monday but, along with Manny Onariase (also ankle), will also be absent from the squad as Cox looks to give both a couple of days of further training before welcoming them back into the fold.

Aaron Jarvis (hamstring) continues to be missing for a total of 10 weeks after his scan results revealed a tear, while Jordan Hallam (thigh) will be out for the next couple of weeks.

Harrison McGahey (hamstring) could play for the Under-23s soon as he looks to step up his return, while Junior Brown (thigh) played 45 minutes for Russ Wilcox's side at Grimsby last midweek.

Andy Dales faces two-to-three weeks out with an ankle injury sustained for the Under-23s last week.

The two sides have only met once, with that meeting coming at the Peninsula Stadium last season. Kevin van Veen opened the scoring but Cameron Burgess cancelled it out as a 1-1 draw was played out.