First team manager Neil Cox has provided an update ahead of the trip to face Barrow in Sky Bet League Two on Saturday. 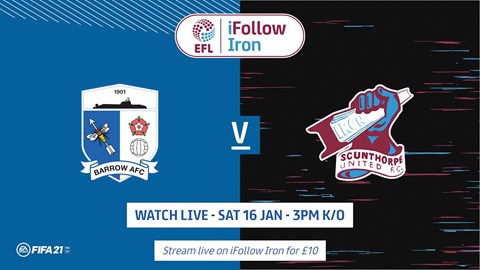 United come into it seeking a win that could potentially take them up to 18th in the division.

The visitors arrived at the Sands Venue Stadium last month, for a game which they lost 2-1, having just parted company with David Dunn, but they are now under the stewardship of former Grimsby Town manager Michael Jolley.

This month, they welcome United one place below them in the division and three points adrift, with a win for the Bluebirds bringing them level on points. Barrow have an eight-goal swing in their favour on goal difference, with a win for the Iron opening up at six-point gap.

Cox said: "We do need to pick up points but there are still 24 games left. We're focused on the match coming up and it'll be a big one this weekend.

"They've had a change in manager and they will have a different focus, different ideas and different ways of playing.

"We have to do our jobs, be focused and if we can play with the intensity we did against Salford the other night, and be braver in the final third, showing more quality, and defend like we did for 99 per cent of the game against Salford then it will bode well for us.

"We played well against one of the better sides in this league, who I feel will finish in the top three. I think the way we handled them, closed them down and stopped them from playing their game was excellent. We have to make sure we do our homework on how Barrow are going to play and how they could cause us trouble, but mostly we have to be better with the ball in the final third.

"People have to stand up and be counted. We'll look at the lads who made their debuts the other day to see how their bodies are.

"Jem (Karacan) has vast experience and just knew when the time was right to stop, and he'll get fitter over the next few weeks. He showed how he has played at a higher level, controlling the midfield and letting our two other midfielders pushed on. George Taft did very well too, playing alongside Tyler (Cordner), and showed his experience. They'll get fitter and stronger."

Providing an update on the players who have been injured in recent weeks, he started by talking about Emmanuel Onariase and Myles Hippolyte (both ankle) before discussing Harrison McGahey and Kevin van Veen (both hamstring), and Olufela Olomola (knee).

He said: "We have Manny and Myles back in the squad, while Harrison is nearly fit. Kev is back on the training pitch, which is really good. He's still lacking a bit of fitness but he brings a spark to the lads on the training ground.

"Myles played really well at Walsall and did well to finish that game after picking up the ankle injury during it.

"Harrison shouldn't be far off at all. The Under-23s game was called off this week and we could have done with him playing. We have to get him back into the first team as quickly as possible, while Kev has been joining in with the warm-ups and a little bit of ball work. We now need to get proper fitness and exercise into his hamstring. We will start pushing him and Fela even harder from next week."

See much more from Neil Cox on iFollow Iron. Click here to get your match pass for the away game at Barrow.