The Iron will be seeking to make it four wins in a row when Bradford City visit the Sands Venue Stadium in a rearranged fixture on Tuesday night (7pm kick-off). 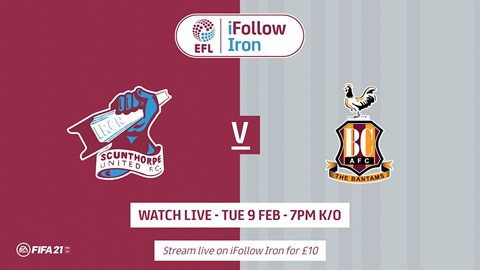 We were originally due to host the Bantams on Saturday, January 9th but the game was postponed because of a frozen pitch.

United, whose home fixture against Oldham Athletic last Saturday was postponed due to a frozen pitch, come into the game following 11 days without a game.

Our last match was on Friday, January 29th, with Alfie Beestin scoring a spectacular winner in our 1-0 success at Colchester United.

Tuesday night will see us looking to make it four league wins in a row for the first time since January 2019.

Following last weekend's League Two games, we sit 18th in the table but victory would move us level on points with Crawley Town, who sit 11th, although their goal difference is a few better.

Jem Karacan (arm/shoulder) will be assessed ahead of the game after coming off against Colchester United last Friday, but his injury isn't as bad as first feared following a scan last week and manager Neil Cox is optimistic he might be in contention for a return soon.

Jordan Clarke (thigh) has missed the last two matches and was ruled out for a month by Cox two weeks ago.

Harrison McGahey and Kevin van Veen (both hamstring) had a full week of training last week and will be assessed prior to the midweek match, while Aaron Jarvis (also hamstring) continues to be missing for a further four weeks.

Olufela Olomola is back training following a knee injury sustained after coming off the bench against Bolton Wanderers in November, but Cox says he needs to play in a couple of Under-23s matches to get match fitness up first.

Bradford are a place below us in the division and were beaten 3-2 at Exeter City on Saturday. Prior to then, they'd gone eight games unbeaten, on a run which included five victories.

Their top goalscorer is former Iron frontman Lee Novak, who has six goals to his name, and the squad also includes ex-Iron midfielder Levi Sutton, defender Niall Canavan (who signed from Plymouth Argyle in January) and former academy product Charles Vernam (who signed from Burton Albion on transfer deadline day).