First team manager Neil Cox has spoken to iFollow Iron ahead of this weekend's trip to take on Morecambe. 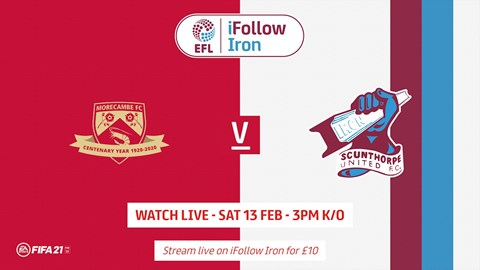 He'll be hoping it's third time lucky, after last weekend's home match against Oldham Athletic was postponed due to a frozen pitch, and then the home fixture against Bradford City was abandoned after half an hour on Tuesday night due to player safety after it started snowing heavily straight after the game kicked off.

Scunthorpe head into the match at the Mazuma Stadium seeking a fourth win in succession, after a hard-fought 1-0 victory at Colchester United in their last game 15 days prior. That was on the back of home successes over Grimsby Town and Port Vale in the same week.

Cox explained: "It's been a difficult week, after a really good one two weeks ago. The boys were raring to go and have been a little bit disappointed.

"It's not been easy to train either, as it's been tough in terms of getting sessions on. We've only had little areas to work on, but the boys have got on with it. They're looking forward to Saturday's game now.

"The main thing is we didn't get any new injuries (on Tuesday night), and we have to go again. It's not just us affected, but other clubs as well (by the weather)."

Scunthorpe faced the Shrimps at the Sands Venue Stadium earlier this season, and took a late lead through Emmanuel Onariase before being pegged back in the closing stages to draw 1-1 after the visitors had become dominant in the second half.

Cox said: "I think they're one of the better sides we've played. They're fit, strong and organised, and their manager (Derek Adams) has done a good job wherever he's been. It's going to be a difficult game for us as it's never an easy place to go, and we'll have to be at our best to get something out of the match.

"We were unfortunate not to win the reverse fixture, but they were on top for the last 15-20 minutes, and that was when we had a soft centre. Now we're a bit more organised and the players know more what I want and expect. It's going to be a tough game but we're looking forward to going there and fighting to get three points.

"We have to focus on what we're going to do. We will aim to do what we've done really well, defending as units and attacking with pace and power.

"We need to get this game on because it's been two weeks without a match and fitness levels will inevitably be dropping, while big pitch training is difficult (with the current conditions). We really want to play it as next week we have a spare midweek before a very busy period of Saturday-Tuesdays."

Providing an injury update, he said Harrison McGahey will be given a further week to recover from his hamstring injury, while Jem Karacan (arm/shoulder) is touch and go.

He said: "Harrison will still miss out as it gives him another week to get some training in, while everyone else has trained who was in the squad in midweek. Everyone needs to be on their toes now and available, as we're going to go Saturday-Tuesday, Saturday-Tuesday for numerous weeks."

Cox added: "Harrison is looking fine and saw the specialist last week, who confirmed he's fine. We have to be careful with him and Kev (van Veen, who was on the bench in midweek for the first time since November after recovering from a hamstring injury) that they do their weights when they can do, to help their recoveries.

"Jem's trained this morning fully so we'll just have to see how he is tomorrow. The game on Saturday might come too soon for him, so we'll have to look at him and then build on after that.

"Jordan Clarke (thigh) has been on the training ground. He's still a little bit off but may start full training next week."

See much more from Neil Cox on iFollow Iron. Click here to get your Morecambe vs Iron iFollow match pass.