First team manager Neil Cox gave his thoughts to iFollow Iron after the home game against Bradford City was abandoned because of the snow. 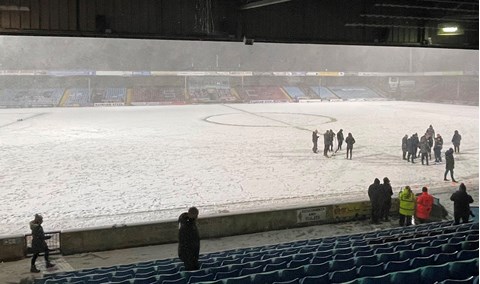 After a mighty effort to get the pitch cleared during the day, the game went ahead, but 30 minutes in, the heavy snow that started falling just after kick-off stopped the game.

Cox said: “The CEO, the ground staff, the chef, community staff, and everybody in the offices have helped get this pitch sorted out - even with the COVID situation and having to be socially distanced we have managed to get this pitch ready to play on.

“The weather has come down later on and ultimately it was the right thing to cancel it. We’ve got to put safety above everything, but it’s bitterly disappointing as we’ve been on a good run of form."

Going into the game, United were confident, and Cox said: “We had a couple of chances, we knew how to play and we’d done our homework to get our opportunities. We knew their right-back would come in narrow and worry about Dev’s (Green) pace.

“They had a bit of the ball, which we knew they would, but nobody really had a good chance for us except for a cross in the box (which Ryan Loft headed off target). When the weather came in, I thought everybody handled it well, the players handled themselves professionally (both teams) and the right decision was made.”

Discussing the bad weather stopping the game, the manager said: “Looking now it’s stopped snowing but I think players' safety is the main thing. The pitch has started to freeze now and we couldn’t get the lines cleared, the blue paint wouldn’t go on.

“It’s been one of those long days where my back’s killing me from helping move all the snow earlier. It’s been disappointing to be honest because we needed to get this game out of the way but now we’ll have to rearrange it again.”

Mentioning the challenges of rescheduling the game, Cox said: “It’s another one when we can’t play this game next week because they already have a rearranged game, and the weather doesn’t look the best over the weekend for some people and some parts of the country so it's going to be a difficult time.

“We just have to focus on our job and if we have to go Saturday, Tuesday, Thursday and then Saturday we will make sure we pick some points up.”