Sam Purkiss will take charge of the Iron's home league encounter against Swindon Town on Saturday.

The London-based official will arrive at the Sands Venue Stadium for his second game of the season and first in Sky Bet League Two. The current campaign is his third in the EFL.

His first competitive game of the season came last weekend as he was selected to take charge of the only Carabao Cup Round One match taking place. That was AFC Bournemouth's 5-0 home win over Milton Keynes Dons, with six cautions given out on the day. 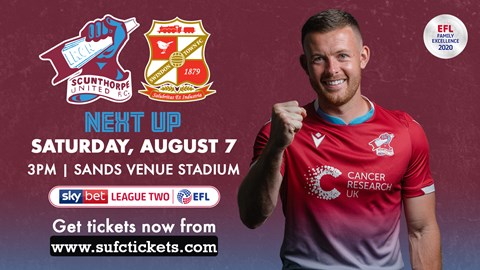 Purkiss' last encounter in Sky Bet League Two came on Good Friday back in April when he oversaw a 1-0 home win for Crawley Town against Cheltenham Town.

After being promoted to the National List of Referees in 2019, he took charge of two Iron matches in quick succession before adding a third in January 2020. That last encounter was a 3-0 away defeat at Northampton Town which saw Kevin van Veen sent off for alleged violent conduct on former defender Charlie Goode - a punishment which was later rescinded. The encounter against the Robins on Saturday will be his first involving United in 19 months and his first at the Sands Venue Stadium in almost two years. Across the three previous games, he's issued 11 yellow cards and one red.

He's taken charge of two Swindon games in the past, with the latest coming last December when he oversaw their 4-1 home defeat to Milton Keynes Dons, with a red card issued to half-time substitute Rob Hunt. Three cautions and that dismissal have been shown across those two games.

Last season, he took charge of a total of 33 matches, showing 82 yellow cards and eight reds.

On Saturday, he will be assisted by Abbas Khan and Ian Smedley, while Carl Boyeson will assume the role of fourth official.