Goalkeeper Rory Watson spoke to iFollow Iron as his side got ready to take on Mansfield Town away on Tuesday night, and he also reflected on the disappointment at the weekend. 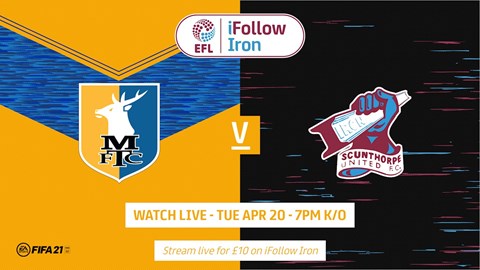 The 24-year-old is looking to keep a clean sheet at the One Call Stadium, following the 3-2 loss at Forest Green, after his side had led with 20 minutes to go.

Watson, who pulled off a string of impressive stops in the game and saved a penalty, said: “I think it was embarrassing, I don’t think we were on it. The first 20 minutes were so poor, with just corners coming into our box and then we managed to get a foothold in the game. I don’t think we deserved to go 2-1 up but we found ourselves in that position. We just collapsed and didn’t defend well enough.”

The Iron's No 1 received a lot of praise on social media for his saves at the weekend, and he said: “When I play there seems to be the same sort of trend where there could have been more goals. I don’t want that to be the case, I want to be keeping clean sheets, I want us to defend the box properly and I want to get results. At the end of the day, that didn’t happen on Saturday and it just frustrating.”

He continued: “I’ve looked at myself in the mirror, what could I have done and I’ve looked at the clips as well, but it’s frustrating from my point of view that we're conceding sloppy goals.”

First team manager Neil Cox was watching on iFollow from home on Saturday after he suffered from illness, which gave him the fans' perspective.

Watson said: “The gaffer came in on Monday morning, spoke to us and told us how he feels. There were a few strong words, which were needed in my opinion. It’s a clean slate and we trained hard on Monday, and we look forward to the game on Tuesday night.

“He just said it was embarrassing, not good enough and it’s not what this club is about. We just seemed to be so lackadaisical in our approach to the game. We didn’t run enough, we didn’t tackle enough or put any pressure on them, I know we scored two goals but I think he said the statistics weren’t up there and that should be a given for any team in this league. We will improve on Tuesday night.”

Looking ahead to the next game away at Mansfield (7pm kick-off), he commented: “We’ve got to go hard and strong from the first whistle. We need to run all over them, and make tackles and blocks. We know what they’re about, they’re a big strong team and we’ve got to give something back to the fans because the last few games just haven’t been good enough.

“They’ve had the same struggles as us this season, but it’s a big game and we’re still not safe. We need the points and three points would be massive for us.”

See much more from Rory Watson on iFollow Iron. Click here to get your Mansfield Town vs Iron match pass.