The Iron play their final away game of the season on Saturday, when they make the trip to take on Bradford City (3pm kick-off). 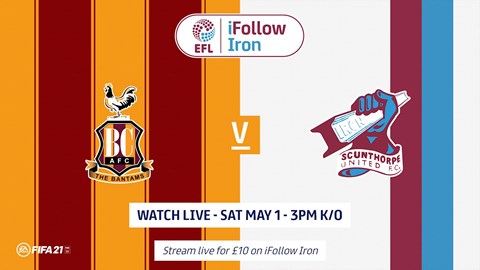 United enter the match at the Utilita Energy Stadium looking to arrest a run of five straight defeats and to get a victory which would mathematically clinch League Two survival with two games still to go.

A draw would also see the Iron retain their EFL status for 2021-22, while anything other than a win for Southend United, coupled with defeat against Bradford, would also see Scunthorpe remain in Sky Bet League Two next season.

Three points for United could climb them as high as 20th in the division, above Barrow and Colchester United.

Ryan Loft and John McAtee both look set to miss out through a non-Covid related illness.

Jordan Clarke looks set to miss the rest of the season with a knee injury picked up at Forest Green a fortnight ago, which forced him to withdraw after 20 minutes.

Harrison McGahey returned to the starting XI at Forest Green and missed out against Mansfield, Walsall and Newport through a quad issue, which will continue to be assessed.

Left-back Junior Brown is out with a hamstring injury that forced him off against Bradford and attacker Jordan Hallam is out with the hamstring problem which he suffered against Oldham in March. Elsewhere, Olufela Olomola's season looks to be over after he suffered a medial ligament injury.

Bradford City come into the fixture in 14th position following a stoppage time defeat in midweek against Salford City.

The Bantams also arrive into it having also lost their last five games, with their last victory coming against 10-man Grimsby Town on April 10th.

The side, managed jointly by Conor Sellars and Mark Truman, had pulled themselves clear of danger in the games that preceded their current run of form, including impressive wins against Forest Green Rovers and Cheltenham Town.

Goalkeeper Connor Wood has played their most minutes this season (3,960) in 44 appearances. Elliot Watt also has 44 league appearances to his name, although two of those came off the bench.

Andy Cook is their top goalscorer with eight goals, while former United forward Lee Novak has six, despite spending a sizeable chunk of the campaign on the sidelines through injury.

Another former Iron, Levi Sutton, has made 32 league appearances (28 starts) in his debut campaign for the Bantams, providing two goals and three assists. He also has six cautions to his name and one red card.

The two sides last met at the start of February in a twice-rearranged fixture which first saw the game called off, before the later date was abandoned.

Eventually played in March, Abo Eisa and Devarn Green netted in a 2-0 win for the Iron, which was incidentally the side's last victory.

Both meetings last season ended in draws, with the away fixture seeing Alex Gilliead and John McAtee netting in the 2-2 draw.