Striker Ryan Loft has looked ahead to the home game against Crawley Town on Good Friday. 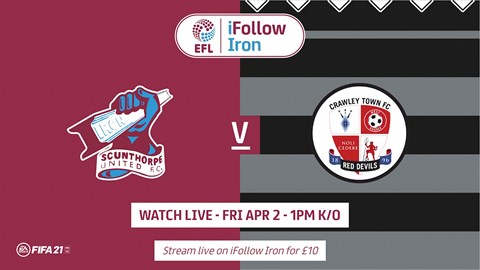 After ten days without a game, the Iron are returning to action and looking to make it five games unbeaten by following up the impressive 2-0 home win over Bradford City last time out.

Speaking to iFollow Iron, Loft said: “Having that little break is going to set us up nicely for the last ten games of the season, so we can hit that flat out now and give it a good go until the end of the season.

“We’ve had some days off to have a rest and recover, but this week has been a really good training week. The weather has been hotter, so it’s been tough, but definitely good.

“With the way we have been playing in the last few games, it’s been good that we can build on things and not just work on the bad stuff. So, going into the last ten games, I think there will be aspects we are going to do a lot better, having had the time to work on it.”

He added: “We have got to keep aiming as high as we can. We want to have good results to put us in a good position and give momentum for next season. Hopefully, that’s what we can do.”

Crawley Town were the opponents for United’s first away league game of the season, and Loft remembers the 1-0 reverse there in September.

He said: “It’s one we want to rectify. But that was early on, and we are a different team now and had some good results along the way. Hopefully we can change that.

“From where we started off at the beginning of the season and that little bad run of form we had, I think we have definitely turned it around. We have had a few occasions where we've gone on a winning streak, and now we haven’t lost in four games. I definitely think we are in a better place now.”

See much more from Ryan Loft on iFollow Iron. Click here to get your Iron vs Crawley iFollow match pass.