Scunthorpe United is delighted to complete the signing of German forward Kenan Dünnwald-Turan on a two-year deal. 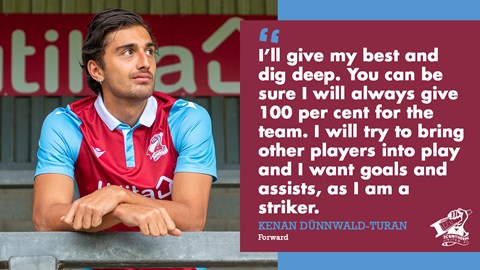 Dünnwald-Turan on his Iron targets

The 24-year-old has been on trial with the Iron since last week, and played in the behind-closed-doors pre-season friendly at Watford on Saturday.

First team manager Neil Cox said: "He's trained really well and shown a lot of good things, and we're glad to finally get him on a contract.

"He's big, strong and has good movement. He likes to get the ball into his feet in and around the box, and can go both ways and strike with both feet. I'm looking forward to working with him and think he'll have a good season.

"There were other clubs interested but we managed to get him in (on trial) last week and he's enjoyed his time here. When we made him an offer, he was over the moon. He's another good one to have in and we're starting to look strong as an attacking force."

Dünnwald-Turan progressed through the youth ranks of Fortuna Düsseldorf, SG Unterrath and Rot-Weiß Oberhausen in his homeland

He played for both MSV Duisburg II and TSG Sprockhövel before a move to England. In August 2017, he joined Bristol Rovers’ development squad and while there had a loan spell at Weston-Super-Mare.

The transfer is subject to international clearance and league ratification.