United’s latest recruit Kenan Dünnwald-Turan is eager to prove himself in English football after impressing the club while on trial. 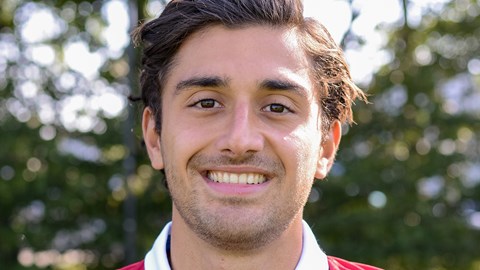 Kenan Dünnwald-Turan signs for the Iron

The German-born 24-year-old has been training with the Iron for a week and was the club’s trialist at Watford last weekend.

Speaking to iFollow Iron, the forward said: “Obviously I’m very happy to join. The main decision for me when I came was that the gaffer had a proper plan and I like that. It’s nice to come to a club like this.

“I’ve enjoyed it. From my first day, the lads have been nice, very friendly and the gaffer has introduced me to everybody. Training has been very nice and I’m looking forward.

“It was a good shift (at Watford). Everyone could get fitness in and we did our best. The result was good, I would say. They’ve just been relegated from the Premier League. There are always things that we can improve on, so we’ve looked at those and will try to improve them.”

Dünnwald-Turan has already had one spell in this country back in 2017-18 and feels he can fit in to the English game after getting a taste of it three seasons ago.

“My spell in England was with Bristol Rovers and I was there for one year. I enjoyed it,” he continued.

“After that, I went back to Germany - my home country - and played for three clubs there; Wuppertaler SV, Fortuna Köln and Bonner SC. I enjoyed those spells as well.

“German football is nice as well, it is different to English football. Here is 100 per cent more physical and all footballers here are athletes, they’re very sharp and work hard in the gym whereas in Germany they look more for technique. I think I fit in well. I’m a big lad, I’m fast and I enjoyed my time here previously because I could use my strengths such as holding the ball up and going deep.”

The forward player comes into the ranks to bolster options up front following the injury lay-offs to Kevin van Veen and Olufela Olomola and, subject to international clearance, he comes into contention for the Iron’s Carabao Cup clash against Port Vale at the weekend.

“I’m hoping very much to be involved,” he stated.

“I’ll give my best and dig deep. You can be sure I will always give 100 per cent for the team. I will try to bring other players into play and I want goals and assists, as I am a striker. I’ve had some pre-season in my home country with a local side at a good level, because I know the manager quite well.

“You can always improve, so that’s what I’ll be looking for. The target is to win as many games as possible.”