First team manager Neil Cox provided his reaction to iFollow Iron after United were narrowly beaten 2-1 at home by Port Vale in the Carabao Cup first round on Saturday. 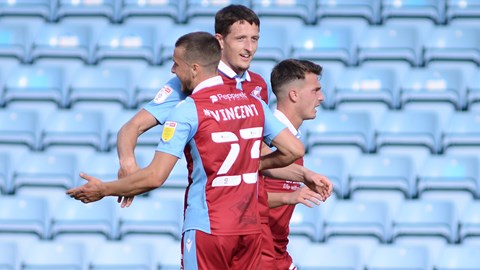 Zak Mills opened the scoring for the visitors just before half-time, but Ryan Loft levelled the scores on his debut with a well-taken goal following a left-wing cross from Ryan Colclough.

Cox said: "It was a really good performance from us. We played with tempo, passion, were aggressive and got balls in the box and got forward, passing it into good areas at times, but we're disappointed that we conceded two sloppy goals.

"They're young boys and they've got to learn, and they will do. There are a lot more positives than negatives from today's game. All my players individually want to get better. I keep saying it's about what we do as a team.

"Just looking back on the game and seeing how we performed, I thought it was an excellent performance from a young side that looked to try and win the game from the first minute.

"As we keep saying, the league's the most important thing and I had to bring people off today who were not quite fully ready for 90 minutes, but as next Saturday (against Newport County) comes we'll be a week stronger and in a better place than we are, while tactically we'll have more time to work with them.

"They've taken a lot on board in a short period of time so far. There were a lot of good performances and there's a lot of positivity around the place. Port Vale are a good side and they are going to be up there this year, but they certainly know they were in a game today."

Cox commented on the debut goal for Loft, adding: "Strikers need to score goals, and for him to score on his debut is brilliant. He worked his socks off for the team."

Reflecting on his first competitive game as Iron boss, he said: "It was a proud moment. I got a bit touchy on the touchline at times with one or two refereeing decisions and need to calm myself down a bit, but that's how I am - I'm a passionate person and want my football team to do well. I want us to play with a lot of passion, aggression and quality, and I think we did show that today."

"We have to get ready to go again on Tuesday," he added, looking ahead to the trip to face Lincoln City in the EFL Trophy. "There will probably be one or two changes as we freshen it up a little bit. There are still some boys who need minutes under their belts, so we'll have a look ahead of it."

The manager also explained John McAtee's absence from the squad, as he has to self-isolate due to being in direct contact with the player who has tested positive for COVID-19, which was reported earlier in a club statement.

He said: "John has to isolate for two weeks before he can go back in, which is a shame, and the other boy was due to be in the squad as well. We'll make sure our players are alright and do the right things as a football club.

"We'd had two days on the training pitch on how we were going to play, and Macca was going to take the set-plays.

"We changed it this morning which made things difficult, but that's football and even more so this year where it will be hard for everybody (due to the COVID-19 situation). We just have to get on with it."