Samuel Barrott will be the man in the middle for the Iron's home Papa John's Trophy encounter against Mansfield Town on Tuesday. 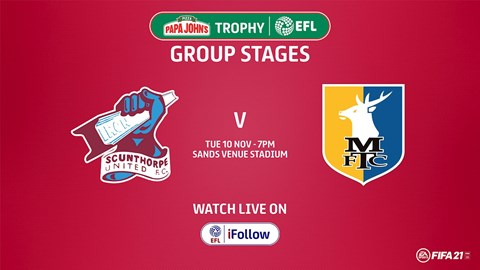 The West Riding-based official will travel to the Sands Venue Stadium for his tenth game of the season and his third involvement in the Papa John's Trophy this season. The current campaign is his first in the EFL as the man in the middle after being promoted to the National List at the end of last season.

His first game of the campaign was the Papa John's Trophy match between Morecambe and Rochdale which finished 2-1 to the away side. He issued two yellow cards on the night. Meanwhile, his latest encounter came in the Emirates FA Cup on Saturday when he made the trip to the LNER Stadium to take charge of Lincoln City and Forest Green Rovers. The match ended 6-2 to the Imps and Barrott issued four cautions.

He's yet to be involved as referee in a match involving the Iron or the Stags, so Tuesday will be his first officiating the two teams.

In 2019-20, he took charge of 17 games in the National League and FA Cup, issuing 44 yellow cards and two reds, while so far this season, in nine games, he's shown 19 yellow cards and no reds.

On Tuesday, he will be assisted by David Avent and Paul Newhouse, while Daniel Middleton has been appointed as the fourth official.