The Iron will be seeking to make it three games unbeaten when they make the trip to take on Swindon Town this Tuesday (7.45pm kick-off). 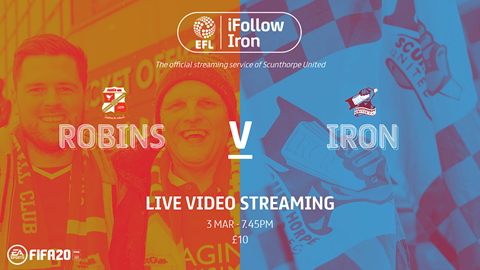 The Iron return to the County Ground two-and-a-half weeks after the original tie was called off an hour prior to kick-off for safety reasons.

United come into the game on the back of the weekend's 2-2 home draw over Port Vale, with George Miller notching his first for the club in the final minute of normal time to secure the point. United have taken four points from a possible six in the last two games and will be looking to build on the run.

The Robins come into the match sitting top of the league, where they have done for much of the season. They were without a game at the weekend too, with their trip to Mansfield Town called off due to a waterlogged pitch.

Their last match was on February 22nd, when they beat Grimsby Town 3-1.

The Iron were dealt two fresh injury blows at the weekend with Abo Eisa (hamstring) and Kevin van Veen (groin) both withdrawn either side of half-time.

Both have been labelled as absentees for the game, and doubts for the match against Grimsby Town this weekend, although van Veen's lay-off isn't expected to be as serious as first thought. Their replacements, Devarn Green and George Miller, made telling contributions to the game and will be in the prime position to take their starting berth.

Defender Harrison McGahey could still miss out as he recovers from concussion, while midfielder Levi Sutton is also edging closer to a return following a similar absence. He was due to return to training last Friday.

Goalkeeper Ian Lawlor returned from a groin injury to take his place on the substitute's bench at Vale Park at the weekend.

Yann Songo'o has fully recovered from a knee injury, and boosted his comeback with 85 minutes for the Under-23s against Hull City last week before being an unused substitute at the weekend.

Regan Slater (ankle) is hoping to return later this month.

The reverse fixture was played on the opening day of the season, with Scunthorpe having the majority of the chances but losing 2-0 to two 'suckerpunch' Swindon goals.

Prior to that, we last faced them at the County Ground in April 2017, emerging 2-1 winners.