Iron defender Rory McArdle is urging everyone to stay safe and follow the government guidelines, as we move towards the end of the second week since the club closed due to the COVID-19 outbreak. 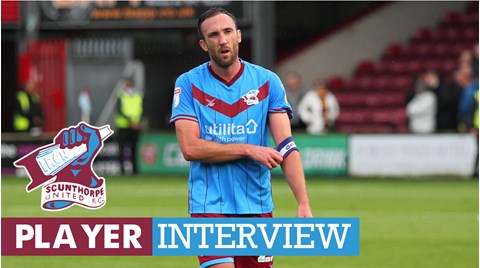 📹 iFollow: Rory McArdle urges fans to continue to do the right things and stay safe

The 32-year-old acknowledged it’s been a difficult time for all involved in football, but has spoken on the need to remain at home as much as possible, while remaining positive that things will get back to normal sooner rather than later.

Speaking to iFollow Iron, he said: “It’s been frustrating, the same as everyone else. It’s a situation that no one has ever been in before, so dealing with it is new.

The Scunthorpe players are still able to fulfil their scheduled exercise each day, with a programme set out for every individual player, in anticipation that football will resume at some point in the future.

“There is still the ability to go out and have that bit of freedom, which is good,” he continued.

“There’s that opportunity to get out and do something. I’ve got a park two minutes down the road from me, so I can have a walk down there and get some work done. If there was a complete lockdown, it would restrict us more. It’s important that we get out and keep our legs moving as much as possible.

“We have programmes in place and there is a lot of information that we’ve been given and there’s always something we can be doing. It might not be as specific as if we were at the club but nowadays there’s plenty online and we have the coaches to help us (remotely).

“It’s okay doing all of our runs at home, but we will also need to catch back up in terms of match fitness. We’ll have to see if they pencil in dates for getting back in before the games and whether there might be behind-closed-doors 11-v-11’s.”

With the original suspension running to April 3rd and the second push back to the end of the month now, one of the most frustrating aspects has been not being able to put a firm date on returning. While that is both understandable and unsurprising, every athlete wants a target to work towards and, at the moment, there isn’t one.

“I spoke to one of my friends and he’s in the building trade. He’s in the same boat and the most frustrating thing is not having a timescale,” he stated.

“We aren’t in a position to give an answer as to when anything is going to happen and we can see the problems it’s causing. Hopefully we can have a date that we end up being able to go with, though it’s difficult to put your finger on exactly when that’s going to be.

“People have said about behind-closed-doors, but I think that would only be viable if the finances are subsidised from elsewhere. That might be the quickest and easiest way to get things finished, but you’ve then got a lack of atmosphere and clubs won’t have the income. There’s enough money in football to combat this and Simon Jordan on talkSPORT last week spoke really well about it. He sat down and worked it out and it was about £160-million, which isn’t a great deal when you look at the transfer fees at the higher levels.”

McArdle reiterated the importance of staying at home as much as possible once more and is following the current advice himself, urging all Iron supporters to do the same.

“That’s the advice that has been given and, although the government are being as lenient as possible, they’ve stressed it’s important that people follow the guidelines.

“We are trying to stay in the house as much as possible, looking after my health and my family’s health and keep on top of my fitness."