Former Iron skipper Paul Reid has built a successful life after playing, with him currently in the role of Academy Manager at Sunderland.

Reid was with Scunthorpe between January 2011 and May 2013, making 77 appearances in all competitions and scoring twice. However, he has mixed feelings when reflecting on his spell in claret and blue.

He said: “The team itself didn’t have a particularly fantastic period during that time. I came mid-season while the club were in the Championship and we weren’t able to maintain that status. We had a difficult season in League One and then lost our status in that division the last year I was there. It didn’t go the way that I or anybody else would have wanted.

“I met some fantastic people and there were some really good players here, but we were just missing some key ingredients that could have made us successful. We simply didn’t have a goalscorer and couldn’t put the chances away, and then the complexity of the game changes and the opposition would capitalise.”

Formerly of Rangers and Northampton Town, Reid shone particularly during a four-year stay at Barnsley, where he won promotion from League One to the Championship. A two-and-a-half year stay at Colchester followed before his move to North Lincolnshire.

Having made over 400 league appearances in his professional career, the defender was contemplative when asked how felt it had gone overall.

He stated: “As my own biggest critic, I’d say I didn’t achieve what I wanted to achieve. I didn’t manage to play in the Premier League and didn’t play enough in the Championship in my opinion.

“There was a time when I was 17/18-years-old when a lot of nice things were being written about me and it was felt I did have a chance of going to the top. I just wasn’t able to transfer that onto the pitch myself when I was in my 20s.

“I can look back at 18 years as a professional footballer and I did manage to live the dream in that regard and have some great experiences.”

Now experiencing life after football, Reid explained more about his pathway to the present role he is in at Sunderland.

“It is a fantastic football club. It’s a great role,” he said. “I thoroughly enjoy it. It has its challenges which make it difficult at times, and it can be unbelievably busy with not enough hours in the day, but it’s exactly what I wanted after football. I wanted a strategic leadership role in sport. I’m loving the points of learning and looking forward to continuing at Sunderland.

“I was at a little bit of a crossroads when my playing career ended and wasn’t sure what direction to take, but I was quite proactive in upskilling myself and giving myself options. I was lucky enough that the chairman at Eastleigh bought Sunderland. I’d impressed him over the time we’d spent together, both as a player and as Head of Recruitment at Eastleigh, and he gave me the big compliment of bringing me to Sunderland with him.

“He knew I hadn’t had direct experience of being an academy manager, but he’d hopefully seen enough in terms of integrity, motivation and willingness to learn.

“I’ve been involved in football all my life, and I always knew Sunderland were a big football club, but it’s only when you work amongst that that you just realise how big it is. It means everything to the supporters and is the first thing on everybody’s lips. Everywhere you go, they all want to talk about football – whether that’s people in the street, taxi drivers, shopkeepers, etc.

“It was always a case of wanting that strategic role within sport. I always looked at it as, if I’m here now what’s the gap in the middle that gets me to where I want to be. I always thought that with a sporting and football background, and a first-hand experience of a sporting environment, then if I can add some theory and academic knowledge to support that then I hope to be in a decent position going forward.”

Reid also had a short stint as manager of Whitehawk during the 2016-17 season, explaining: “It was something I’d never really set my heart on (management), but it came about because I was asked to come out of retirement and play some games for a manager I’ve worked for in the past, who was Richard Hill. When he left for a role at Aston Villa, I was asked to step in. I wouldn’t say that’s the future for me, but I’d certainly do things differently having had that experience. I took some points of learning from it, but I don’t see it as my long-term plan.

“When I got into my 30s, I did start thinking about what was next. I did initially think I’d go down the football agent route, and made inroads into that, working for a football agency for around three years. I then came to the realisation that it possibly wasn’t for me. It was then that I took stock of where I was and what I wanted, and became a bit more focused. I always felt I had drive, motivation and was reasonably intelligent, but was probably guilty of going off on a tangent too much and not actually dedicating myself to a set plan.” 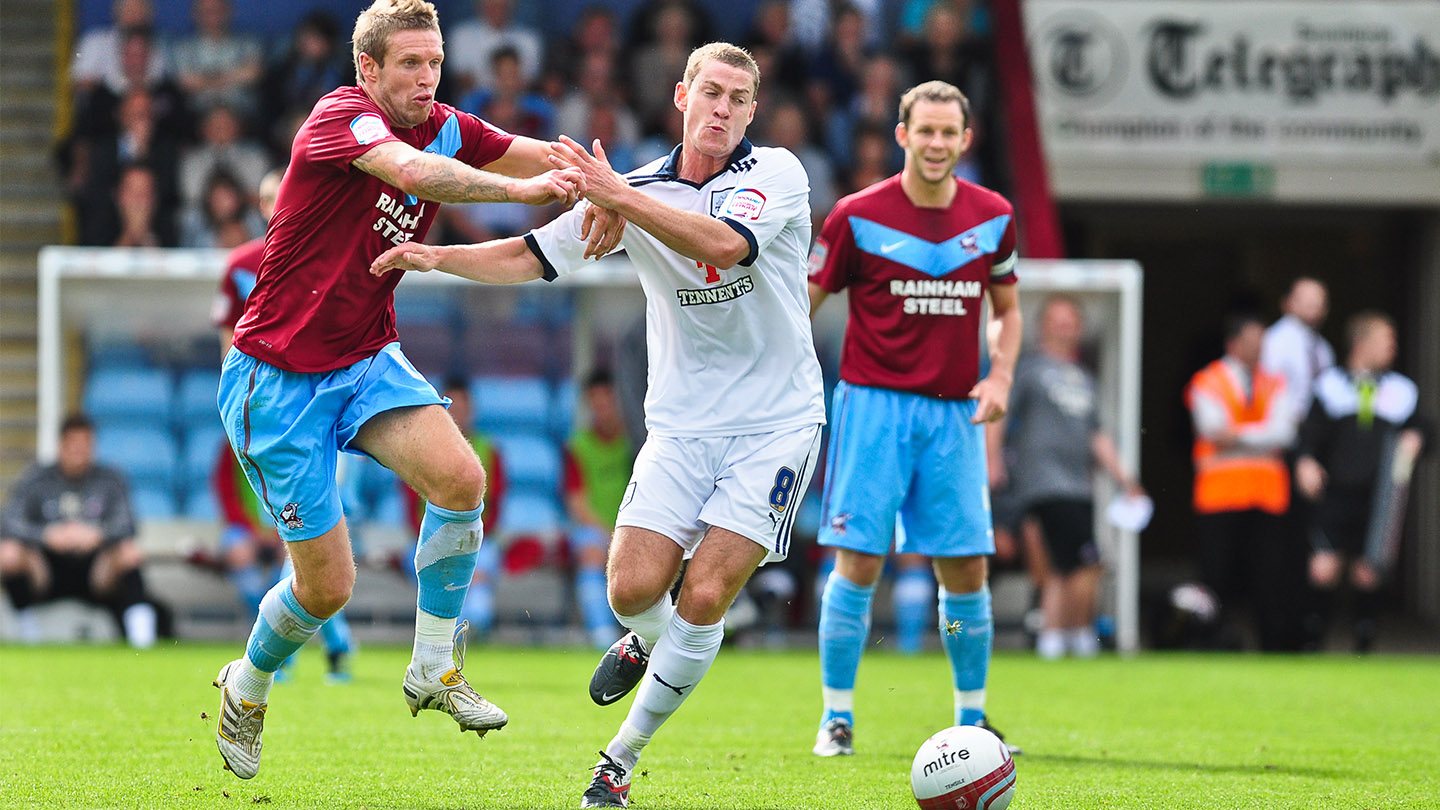 Paul chooses a six-a-side team of players he performed alongside for the Iron.

SAM JOHNSTONE
“He came on loan from Manchester United and although he was young at the time, you could tell he would have a chance. He was good with his feet, a great shotstopper and had a little bit about him.”

CLIFF BYRNE
“He’d be strong and good at organising. He’s the best captain I’ve ever had, a fantastic character and great in the dressing room. If I ever was to be a manager, he’s certainly someone I’d want involved.”

DAVID MIRFIN
“He was a good defender, not the tallest for a centre-half but really strong and deceptively quick. I felt there were times, even during that difficult spell at Scunthorpe, where we struck up a decent partnership.”

MARK DUFFY
“We were together at Scunthorpe and he did really well. What he’s gone on to achieve is unbelievable. He’d be unplayable in indoor five-a-side.”

MICHAEL COLLINS
“Mainly because he’s my Under-18s coach at Sunderland and if I don’t pick him there would be frosty atmosphere! He’s still fit now and can get up and down, break up play and has a good footballing brain.”

JON PARKIN
“I think we need a focal point up there. Because it’s six-a-side he doesn’t have to run in the channel. His goal record throughout the leagues is unbelievable. In terms of football ability, he’s tough to play against and I know how hard it is to play against him.” 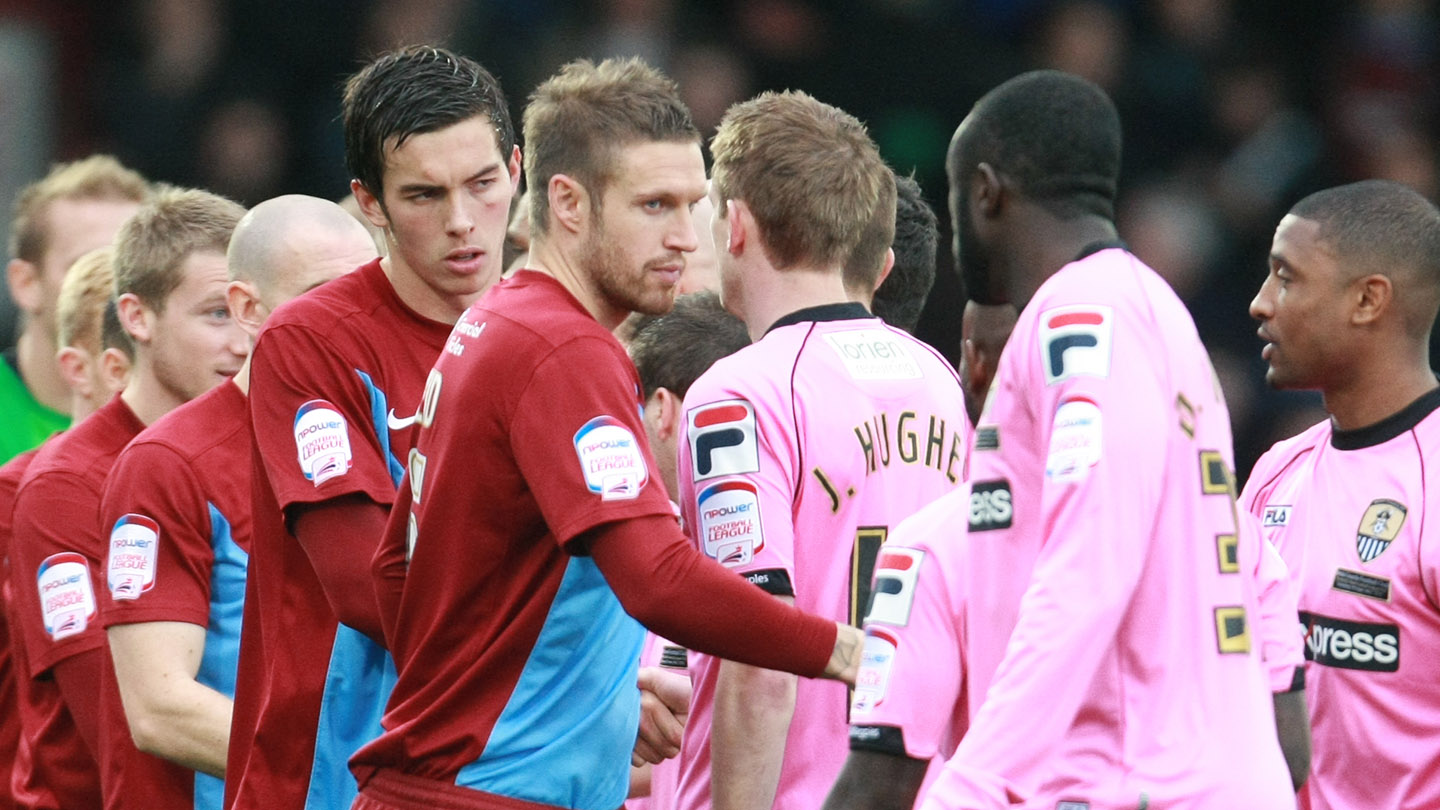 What was the best moment of your career?
PR: The highlight of my career is the play-off final at the Millennium Stadium for Barnsley in 2006. I was fortunate enough to be captain, and the game took us up to the Championship from League One. We were behind in the first leg of the semi-final against Huddersfield, and then won 3-1 and then also won the final on penalties. Lifting the trophy with all my friends and family there will stay with me forever.

What was the worst moment of your career?
PR: The lowest point was when I left Scunthorpe. I was 31/32-years-old and the offers I was receiving either weren’t suitable financially or geographically. I definitely had a period where I was in the wilderness and wasn’t sure what to do next or where to go next. It wasn’t until I signed for a second spell at Northampton that I had some direction. Even that was only for a section of the season. I never really got back into football until I got a phone call out of the blue the following summer from Eastleigh.

What was the best goal of your career?
PR: I didn’t score any 25-yard screamers. Most of them were headers from corners. The one that sticks out the most is the one I scored for Barnsley against Huddersfield in the play-off semi-final. We got beat 1-0 at home in the first leg and I managed to pop up at a corner and score a header to put us 2-1 ahead. There were 4,000 Barnsley fans in that end, with friends and families in the crowd.

What other moments stand out from your career?
PR: I played in an FA Cup fixture against Manchester United, and was asked to man-mark Paul Scholes in the first-half and Cristiano Ronaldo in the second. That was a tough day at the office! To be able to look back and reflect on that, and say I shared a pitch with two absolute superstars of the game is something I can look back on and be proud of. Scholes was so switched on and ahead of the game, while Ronaldo had raw pace and was yards ahead of me. I was never really quick but was relatively so back then, and to be outpaced like that never happened at the level I was at, at the time. It was a real eye-opener.

Tell us about your international career…
PR: I played more for the England U18s, U19s and U20s then my record shows. I probably played ten games across the age groups and it was a good experience to train and play with and against the elite at my age group. It was a good yardstick to see where I was. It was a good life experience that I look back on in pride.

Do you have any regrets?
PR: I didn’t maybe achieve what I wanted to. But I can look back and have no regrets in my application and what I put into it. I don’t think I could have given anymore. Maybe with the fresh research and information we have available now, I’d have trained slightly differently and with a different focus, but at that time I did everything I was told and more. I sacrificed everything I could and one thought is should I have played as many games when I really shouldn’t have? For examples ones, where injections were needed. Would I have had a longer career if I hadn’t pushed myself to do that?