The Iron return to League Two action when they face Crawley Town at the People's Pension Stadium on Saturday (3pm kick-off). 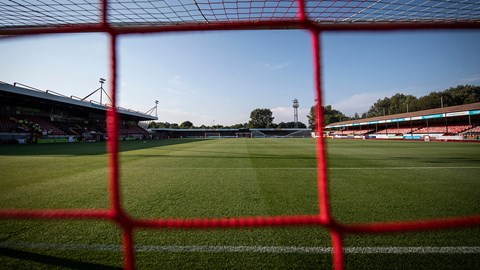 Scunthorpe come into the match following a 3-0 defeat at Northampton Town in midweek which saw striker Kevin van Veen dismissed in the first half for a push on former defender Charlie Goode.

Prior to that result in the league, the Iron had put in two battling performances to get a pair of 2-2 draws away at Bradford City and at home to Crewe Alexandra, respectively.

Crawley had a 2-2 draw of their own in midweek, away at Plymouth Argyle. They led the game through Ollie Palmer's goal before Antoni Sarcevic drew the Pilgrims level with a penalty just before half time.

Luke Jephcott put the hosts ahead with seven minutes to go, but Palmer's second of the game and 12th of the season in the 92nd minute earnt the Reds a sharing of the spoils.

Scunthorpe come into the match sitting 16th, but could climb to 13th if results go their way. Meanwhile, John Yems’ Crawley sit in that 13th position.

United will continue to be without on-loan defender Junior Brown, who is set to miss the next couple of weeks with a medial ligament injury.

There was good news on Thursday though, with Kevin van Veen's red card at Northampton Town overturned, which wipes out the three game ban he'd have had to serve.

Rory McArdle (hamstring) will also be assessed after missing the last five matches through that injury and illness prior.

Yann Songo'o (knee) could receive some game time in the Under-23s against Hull City on Monday should he get through training well this week.

Rory McArdle and Matthew Lund scored the goals, and Rory Watson saved from a spot kick, as the Iron drew 2-2 against Crawley Town at the Sands Venue Stadium back in August in the reverse fixture.