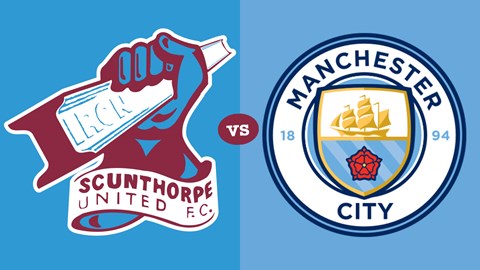 The game kicks-off at 7.45pm and will be played at the Sands Venue Stadium, with victory securing a place in the quarter-finals.

Hurst knows it will be a tough test against a talented young side he’s been able to see a fair bit of.

He told iFollow Iron: “They have some really good players in there, so we’ve got a challenge to get through anyway. I think it’ll be something a little bit different for the fans and hopefully we can get them here to cheer the team on and see a good game of football. I’ll be amazed if there isn’t one player in their line-up who goes on to have a real impact, whether it’s in City’s first team or another club’s team.

“They have some good players and it won’t be easy for us. They knocked my old club (Shrewsbury Town) out in the last round, who put a strong team out, but we’re hoping to get through.

“We’ve had a look at their games and they have a lot of good players coming through the ranks. One of two of these lads were involved in the weekend at the FA Cup against Port Vale so it’ll be interesting to see what team they do put out.

“Either way they’re going to play a style very similar to the first team in that they want to dominate possession and get two midfield players high in support. We’re going to have to be in a good shape, be patient at times, but also make sure we carry a threat as well.”

Providing an update on the squad, the manager ruled out defender Rory McArdle, who’s been ill this week.

He said: “The squad look pretty good in general. Jamie Proctor is cup-tied so doesn’t come into contention, while Rory misses out through illness. He hasn’t been in this week and it sounds like flu syptoms. I’m hoping he can get over that and at least come into contention for the weekend (when the Iron face Newport at home).

“Other than that, we have one or two carrying small knocks who may be involved or might have a different role to play. There will be some changes, but it’ll be a strong team with the thought of trying to get through to the last eight.

“Having come through the group stages and an excellent win at Blackpool, it’d be silly to throw that away now. There’s a big prize at the end of it, and from a playing point of view that’s to walk out at Wembley. It’s getting closer but we know it’ll be a difficult game and different from a lot of games we’re involved in week-in week-out, but one I believe we can win if we apply ourselves correctly and put on a good performance.”