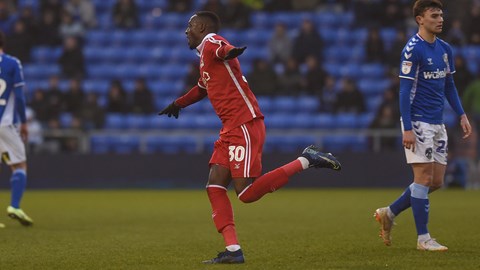 It was a win that sent Scunthorpe back up to 12th in League Two, with 378 Iron fans there to witness it, and Hurst said afterwards: “It’s nice to give the fans a victory and start 2020 in the way we’d like it to continue obviously. It was a very good performance given it's the third game in quick succession, and a thoroughly deserved victory.

“It was a very well deserved win today. The only issue I had was whether we were going to get that second goal. They use the long throw and with the size of their team at set-plays, I was just concerned it might come and bite us if we didn’t get that second.

“We did and we managed to keep a clean sheet too, so I’m delighted. We want to pride ourselves on clean sheets and that’s another one today.

“After a frantic start, as soon as we put a passing move together, we looked a better team and seemed to grow in confidence, while it affected theirs (Oldham’s). Following that, we became a real threat.

“When Abo scored, I didn’t think it was a good position to hit it from really, but he got pace on it right into the corner and he was a threat throughout. The goal gave us a good platform to build from. Both wide players (Eisa and Alex Gilliead) had the beating of their full-backs throughout, while Novs (Lee Novak) worked his socks off again as the targetman."

Explaining the three changes to the side, including a return to the side for Kgosi Ntlhe after missing the last two games, the manager said: “Jake (Eastwood) was doing very well before and I think it was right to bring him back in. Kgosi is back, which is a real bonus to us.

“We thought his injury last week was originally a lot worse than it was. It’s a strange one, and the first time Michael (McBride, head of medical services) has experienced someone with that injury. It’s a muscle underneath the hamstring that was affected.

“Kev (van Veen) has been poorly since Sunday so we brought John McAtee in to give support to Lee Novak.”