Russ Wilcox provided his reaction to iFollow Iron after the hard-fought 1-0 victory over Forest Green Rovers. 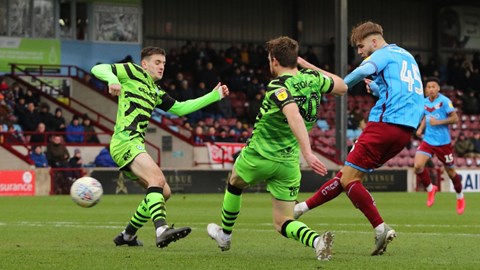 John McAtee scored the winner just after half-time, as United saw off Mark Cooper’s side at the Sands Venue Stadium, and made it a 100 per cent record against them this season following an away victory in December.

That result makes it two wins out of three for a Scunthorpe side who hadn't won at home in the league since November 22nd before the victory over Cheltenham Town a fortnight ago.

Wilcox said: “It was excellent and I thought the lads were outstanding. In possession, we weren’t that great in the first half but out of possession we were really good.

“In the second-half, we just got right on the front foot. We changed it a little bit in midfield and let John (McAtee) play more as a 10, while Kev (van Veen) went back up top, as split strikers. It worked a treat and we got an outstanding goal. We wanted to press them higher up the pitch but we still had a bit to do. John’s looking good at the moment though.

“We had two more opportunities to put the game to bed, with Macca again and obviously Kev with two one-on-ones.

“Overall, we knew they’d have a fair bit of the ball but it’s about getting results. We did great today and looked really good in the second-half. We put Gilly (Alex Gilliead) in midfield in the second half, changing a few bits around, and it’s worked for us.

“The clean sheet is massive. We defended really well, standing firm as a back five and getting some great blocks and first contacts on the ball in difficult conditions.

“I think over the course of 90 minutes we deserved the win.”

Wilcox confirmed goalkeeper Ian Lawlor missed the game through a groin injury but is hopeful he’ll be back in contention for the away clash at Port Vale next weekend. Harrison McGahey and Levi Sutton both missed through concussion protocol after they both suffered it in training.

The game saw Lewis Butroid make his first league start for the Iron since April, following a loan spell at Spennymoor, and Wilcox said: “He looked up to speed – fit and strong, and his contribution was really good.”

The club also held their fourth annual Grassroots Day, and Wilcox was delighted to win in front of the young support from local junior football clubs.

He added: “I thought they were brilliant, cheering the lads and giving them a massive lift when defending at the end to see the game out.

“It was fantastic to see the young kids enjoy themselves and we rewarded them with a win. Hopefully they enjoyed the whole day and will come back to support us again."