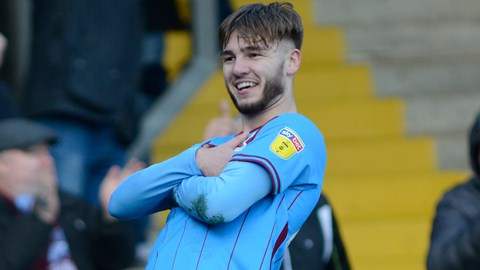 John McAtee’s opportunistic strike on 17 minutes gave Scunthorpe the lead at the Sands Venue Stadium, and it was one they comfortably held onto against the play-off chasers and could even have added to late on.

Wilcox, from whom in-depth reaction can be seen on iFollow Iron, said: “It was a great finish from Macca, he still had a lot to do when he went around the goalkeeper. He was on his weak side and knew he had to put a bit of pace on it as well, but it was a terrific finish and I’m delighted for him.”

“I thought we deserved it,” he added. “We had the better chances and it was so important today to make sure our shape was good without the ball. It was just about perfect.

“We have to have a base to work from. There have been too many goals going in recently. In the last ten games, we’ve conceded an average of 2.5 goals a game. If you’re doing that, you struggle to win – it’s as simple as that.

“We know we have really good offensive players in the squad but have to keep it solid at the back and work from that base.

“It would have been nice to get the second goal because you know what’s going to happen in the last few minutes – they’ll throw long balls into the box, and throw-ins, but we stood tall and were strong as a back four.

“There wasn’t a bad individual performance for me. It was excellent and a well-deserved three points.

“We limited them to few opportunities. They had more possession but that doesn’t win games. We jkept a good shape and played on the counter-attack at times, and could have had two or three more goals. Kev (van Veen) had a great chance, and Andy Butler forced an unbelievable save with a header from a corner late on.”

Wilcox added Rory McArdle and Yann Songo'o could play a part in Monday's Under-23s game at Hull City as they look to step up their match minutes on their returns from knee and hamstring injuries respectively.

He concluded by thanking the fans for their support, adding: "I know all about the crowd here and it's a special win. It's not for me. It's for them and the players as well. Hopefully it can kickstart us again and get us on a decent run."