Winger Alex Gilliead is looking forward to the challenge his side will face against Cheltenham Town this Saturday and is looking to earn three valuable points in the league against the play-off chasers. 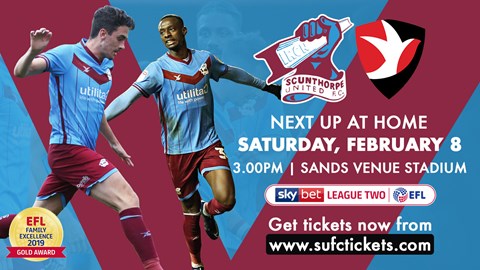 The 23-year-old previewed the game with iFollow Iron and spoke about the importance of defending from the front as a team as United look to cut down on the number of goals they concede.

He explained: “We have two home games against two tough teams. We’re just focusing on the first now, which is on Saturday against Cheltenham.

“They’re up there and will have aspirations of being in the play-offs at the end of the season. It’ll be a tough game but I’d fancy ourselves at home against anyone.

“When we were down there (in August), it was a hard game. We took the lead and got defeated 4-1, collapsing in the last 10-15 minutes conceding some sloppy goals. What I remember from them was they were a big team.

“We’ll have a fight on this Saturday and we have to make sure we stand up to it and get stuck in, and that we’re competing for every ball.

“From the way we played at Bradford and against Crewe we can take encouragement. We just to have make sure we’re all playing for each other so we can get a result.”

Talking about how preparations have gone so far, the five-goal winger continued: “Monday was a cool-down, while Tuesday was a hard session. We’ve gone through shape with Russ (Wilcox) and Turny (Lee Turnbull) on Thursday and then Friday will be a light one making sure we’re ready to go on Saturday.

“As a team, we agreed we’re conceding way too many goals at the minute so we need to address that immediately. We can’t concede as many as we have been. As a team, we’ve been working on our defensive shape and where we need to be. It’s been good, and the coaches have been getting their point across.

“We all need to attack as a team and defend as a team. The attackers need to the first line of defence.”

He concluded with his aims for the final 15 games, saying: “Just to continue playing. I want to play every game, and still get goals and assists. We want to finish as a strongly as possible for the club and make sure it’s a positive last 15 games for everyone and the fans.”