A busy December fixture schedule for the Iron continues with a trip to face Southend United in Sky Bet League Two on Saturday (3pm kick-off). 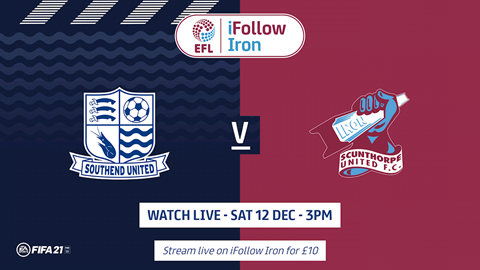 Get your £10 match pass for Southend United v the Iron

The Iron come into the game off the back of three away wins in a row after seeing off Oldham Athletic, Port Vale and Harrogate over the last five weeks.

Scunthorpe did narrowly lose in midweek, 1-0 to Colchester, but were largely dominant and found an in-form Dean Gerken in their way on numerous occasions en route to goal.

Southend United come into the game rock bottom of the EFL with just six points to their name from 15 games this season.

They have, however, picked up four of those points from their last four games, first beating Walsall for their only win to date so far this season, before playing out a goalless draw at Stevenage last time out.

The side have scored six goals and conceded 29 so far this season.

Mark Oxley is the only Shrimpers to play every minute of every game so far, while Elvis Bwonomo is second with 1,170 league minutes under his belt.

The Iron were dealt a massive blow going into the game with Kevin van Veen set to miss up to 10 weeks with a hamstring tear.

Elsewhere Harrison McGahey (hamstring) looks set to be on the sidelines too after he was withdrawn in the first half on Tuesday, while Jordan Clarke also looks to miss out on the trip to Essex as he recovers from playing three games in a week for the first time in almost a year.

Junior Brown (thigh), Frank Vincent (thigh) and Harry Jessop (shoulder) were already on the sidelines prior to the match in midweek.

The last three times the two sides have met at Roots Hall have seen players sent off. James Perch was the last for two yellow cards, while Cameron Burgess and Neal Bishop were also dismissed - although Bishop's was later rescinded.

Scunthorpe took maximum points the last time the sides met, back in March 2019. Tom Pearce, Tony McMahon, George Thomas and James Perch all netted as the Iron came from 1-0 down to win 4-1.

Overall, the two sides have met 57 times, with the Iron winning 25 of those, whilst Southend have won 17 games.