The Iron play their first game in a week when they visit Harrogate Town on Tuesday night (7pm kick-off). 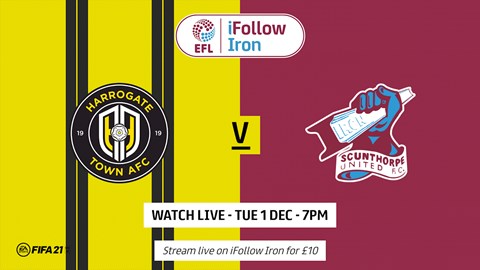 Last Tuesday night's narrow 1-0 home loss to a resurgent Bolton Wanderers was the culmination of a spell which saw six games played in 16 days, following the return of a large number of the squad from COVID-19-related self-isolation.

Prior to that game, Scunthorpe had been unbeaten in three matches and put in improved performances, so first team manager Neil Cox will be hoping the players' freshness following the week off from action will result in them putting in a performance that gets three points at Harrogate.

United sit second bottom in the division but recent performances have raised morale and the team will be hoping to climb away from the bottom two during the eight games they have in December.

Cox will be familiar with the opposition, who won promotion to the EFL for the first time in their 106-year history in August after defeating Notts County, where he was assistant manager, 3-1 at Wembley Stadium.

The Sulphurites' last encounter came at the weekend when they were dumped out of the Emirates FA Cup at the second round stage following a 4-0 win for away side Blackpool. The win for the Tangerines also included a goal for former Iron loanee Jordan Gabriel, while Harrogate's Kevin Lokko was dismissed with a minute to go for the denial of an obvious goalscoring offence.

They sit 12th in the division having accrued 19 points so far. Midfielder George Thomson and defender Connor Hall top their appearance tables with 14 league starts so far.

Their top scorer is former Iron youth trainee Jack Muldoon with seven league strikes to his name. After leaving us, he subsequently represented Brigg Town, Sheffield, Glapwell, Alfreton Town, Stocksbridge Park Steels, North Ferriby United and Worksop Town. With the latter he scored 21 league goals during the campaign, attracting interest from Football League clubs. He went on to play for Rochdale, shine at Lincoln City and continue his progression with AFC Fylde and Harrogate.

United will be without Kevin van Veen, Junior Brown and Olufela Olomola for the match.

The latter two were both injury victims from the game against Bolton Wanderers a week ago, with Brown on the sidelines for "weeks rather than days" following a slight tear in his thigh muscle. Olomola faces three months on the sidelines following a knee injury sustained after coming off the bench against the Trotters.

The Dutchman won't be involved as he makes steady progress after lasting just 11 minutes against Morecambe 10 days ago. He will be out of the Iron's next two games at least.

Meanwhile, Harrison McGahey and Manny Onariase, who both picked up knocks against Bolton, look set to be passed fit to play at Harrogate.

Jake Taylor also returns to contention following two weeks of isolation after coming into close contact with an individual who tested positive for COVID-19, while Harry Jessop is awaiting scan results and advice from a specialist after picking up a shoulder injury in training.