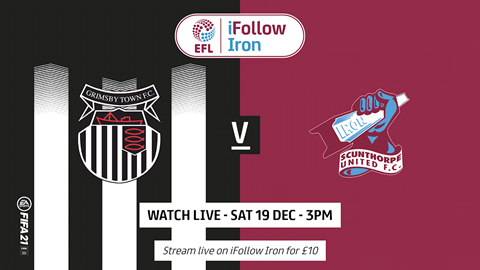 Get your £10 match pass for Grimsby Town v the Iron

Scunthorpe enter the game buoyed by a last-gasp 2-1 home win over Barrow at the Sands Venue Stadium on Tuesday night. Abo Eisa and Jordan Clarke were on the scoresheet, with the latter's goal being our first 90th minute winner since November 2017.

The result meant we stayed 18th in League Two but could potentially climb as high as 16th with a victory at Blundell Park.

Ian Holloway's Mariners enter the game on the back of a 3-1 away loss at Southend United on Tuesday night, which saw former Iron defender Luke Waterfall sent off in the closing stages.

They are 20th in the division and will be seeking a first win since November 3rd, when they defeated Barrow 1-0 at home.

Waterfall was top of their appearance charts, with 15 to his name, while they have four players on two goals as joint top league scorers so far this term.

United will have Mason O'Malley and Jake Taylor both available following their absences in midweek.

O'Malley missed out as he was rested following a string of games in a row, while Taylor missed out with a sore achilles.

Harrison McGahey (hamstring) is still missing, but is expected to be back in the New Year, while Junior Brown (thigh) is ahead of schedule and back on the training pitch, but is not ready for action, as yet.

Kevin van Veen has returned to the Netherlands for a short break as he recovers from an injection on the hamstring injury which will keep him out for around 10 weeks, while Frank Vincent (thigh), Harry Jessop (shoulder) and Fin Shrimpton (ankle) are all on the sidelines.

Kevin van Veen was the match-winner on two occasions last season against the Mariners, netting a brace in the 2-1 Leasing.com Trophy group stage win in September and then notching the winner at Blundell Park in December.

We were defeated 2-0 at home by them back in March.