The Iron will be seeking a first win in three games when Barrow visit the Sands Venue Stadium on Tuesday night (7pm kick-off). 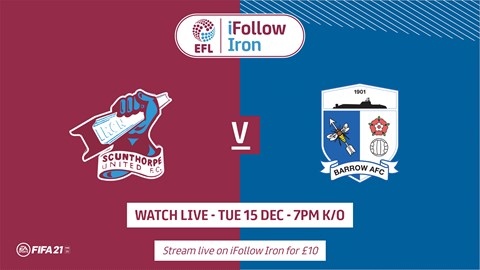 United come into it on the back of successive 1-0 defeats at the hands of Colchester United and Southend United, and will be seeking a win that could potentially take them up a place to 17th in the division.

The visitors, who parted company with manager David Dunn following their weekend defeat at Crawley, sit 21st in the table and could climb up a place if they're victorious on the night.

The Holker Street side will be seeking a first league win since October 31st when they defeated Bradford City 1-0 at home through a Connor Brown goal.

In the meantime though, they did draw 2-2 at home to Forest Green Rovers thanks to strikes from Luke James and Dior Angus.

Goalkeeper Joel Dixon tops the appearance charts with 17 league starts to his name, while Angus is top scorer with four league goals.

Former Iron left-back Kgosi Ntlhe joined in the summer following his release from us, and has made six appearances in the league so far.

It will be a family affair in the dugouts too as former Iron goalkeeper Josh Lillis, son of current assistant manager Mark, is player/goalkeeping coach for Barrow.

Neil Cox is hoping captain and full-back Jordan Clarke will be fit to be involved in the game after being rested at the weekend following three games in a week for the first time in almost a year.

Mason O'Malley, Manny Onariase and Jake Taylor all missed training on Monday as they felt the effects of Saturday's game at Southend, while John McAtee and Alex Gilliead, along with the midfield pair of Lewis Spence and Alfie Beestin will be assessed going into the game.

Kevin van Veen had an injection at the weekend following a torn hamstring which will keep him out of action for 10 weeks, while Harrison McGahey also faces a month on the sidelines with his own hamstring problem.

Junior Brown (thigh), Frank Vincent (thigh) and Harry Jessop (shoulder) continue to miss out for an extended period of time.

It will be our first encounter the Bluebirds, who were promoted from the National League under the leadership of Ian Evatt last season, since February 1972 when Rod Fletcher scored a brace in a 2-1 home success at the Old Show Ground.