Speaking ahead of this weekend’s home league encounter against Leyton Orient, manager Neil Cox is hoping his side can transfer the form shown away from home in recent weeks. 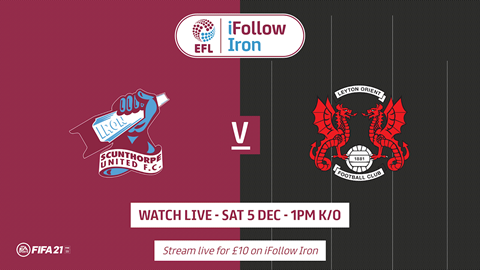 United have won the last three on the road, but have failed to take maximum points in the last seven matches in all competitions at the Sands Venue Stadium, although they were just a whisker away from that a fortnight ago when Morecambe netted a late equaliser.

Talking to iFollow Iron, he said: “We’re on some good form away from home and we now need to bring that home.

“We’ve started games here really well so we need to continue that. We’re worrying more about what we do this week and try to get our home form back up to scratch.

“Tuesday was all about what we did. Yes, we have to do homework on the opposition and how they play in terms of set pieces and patterns of play. We had a good week off last week and got a lot of work into the boys on the training ground. Tuesday was a good away result, but we always want better. We just want to win games and to start picking up points at home.

“It’s about carrying on as we are, being positive going forward and taking big steps every time.”

The Iron welcomed back Jordan Clarke into the side following his appearance in the away win at Oldham on November 14th.

An update was given on how he came through his 78 minutes, along with the other players: “There are a few boys with knocks and bruises. Jordan is fine, but we’re going to carry on keeping an eye on him.

“We have to keep building his fitness up and not push him too soon. We will look at everyone and ready to go 100%. We have a little bit more work to do before we make a final decision on the squad.

“We have two or three with knocks and bruises that should be fine. They’ll all get the relevant treatment and we’ll go from there.”

Leyton Orient come into the game off the back of three successive wins, so arrive in North Lincolnshire full of confidence themselves and with a number of experienced players.

“They’re a good footballing side and try to get the ball down and play,” he continued.

“They’ve got some good experience in the side. Jobi McAnuff is still playing at 39, so you’ve got to give him a lot of credit. It’s going to be a really tough test for us. They’re a good footballing side and they’re expecting to be at the top end of the division come the end of the season.”

Junior Brown looks set to miss the next month at least following a tear in his thigh muscle, as was confirmed prior to the Harrogate win in midweek. The United boss gave an update on the situation: “It’s going to be four or five weeks for Junior, we think.

“Until we get the news from the specialist, we don’t know how his injection went. When we do, we should know a little bit more. We’re hoping it’s just going to be four-or-five weeks. Harry Jessop is going to be out for a couple of months. I don’t think he’s dislocated his shoulder, but we have to be careful with him because we don’t want it popping out again.

“It’s bad news for him and for us, because he was going to go out on loan again.”

There potentially is good news on Kevin van Veen, however, who has sat out the last two matches with a hamstring problem and sciatica following his return from a knee injury.

“We will look at him again on Friday before we make our mind up on him for this weekend. He could be in contention, we just have to make sure he comes through training and we don’t want to rush him again and lose him. We have to make sure, from now on, he’s fully fit.”