Scottish midfielder Lewis Spence is looking to make a big impact in England after completing his move to United. 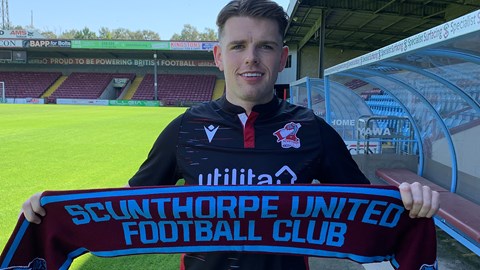 The 24-year-old pens a two-year deal after leaving Scottish Premier League side Ross County, and spoke about the move in an interview with iFollow Iron.

He said: "My agent got in touch with me two or three weeks ago about the possible move and it's been going on from there really. I'm very happy to be here.

"I've been in Scotland all my career and feel I've gone through all the leagues there to the highest level, and I believe this is the change I need.

"I have ex-team mates and friends who play in numerous leagues (in England, who have told me about League Two) so I'm really looking forward to seeing what I can do here.

"I'm a central midfielder, and was played defensively by my previous clubs in a 'Number 6' role but I have a lot of energy, feel I'm good on the ball and a quick passer.

"I like a good tackle and the leagues are tough, physical and fast paced in Scotland so I feel I've got a grounding in what to expect and I'm looking forward to getting stuck in.

"I have a winning mentality and I'm coming here to do good things."

Spence's first training session with his new team-mates was on Monday, and he continued: "I'm looking forward to meeting the lads. It's going to be a bit different over the first week or so due to COVID-19 with the smaller groups but I can't wait to get out there.

"It's less than six weeks before the season starts now. I'm delighted to be in England and at Scunthorpe. I want to push as high up the league as we can and personally do the best I can for the club and play a big part."