Striker Aaron Jarvis is hungry to take his chance at Scunthorpe United, after signing a two-year contract at the Sands Venue Stadium. 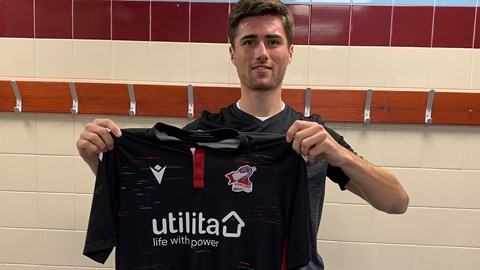 Jarvis signs for the Iron

The 23-year-old feels he has a lot to offer the Iron and can't wait to meet his team-mates when they return for pre-season training.

He said: "It's been about a month in the making. I was delighted when I first heard the interest, and am delighted to finally put pen to paper.

"It's been a difficult time with the pandemic for everyone but I've happily signed a deal here and have some security for the coming years."

Speaking about his background, which includes a stint playing on-loan in Scotland for Falkirk, he said: "I went through the academy at Basingstoke in non-league and got into the first team, getting a move to Luton on Deadline Day 2017 and spent two years there. We had back-to-back promotions and hopefully I can bring a bit of that experience to this club.

"It was hard to get in the team in front of players who were doing so well on a regular basis at Luton. I'd like to have more impact in a promotion push myself, and get this club back to where it should be."

Talking about his style of play, he continued: "I think I'm a strong player, a good targetman. I like to get the players around me into play, get the team up the pitch and create chances. If I'm given a chance, I feel I will more than likely score so I'm looking to help the team shoot up the table."

6ft 2in Jarvis knows there is a lot of competition for the striker places but he's hoping his strong work ethic will quickly win over the Scunthorpe faithful, adding: "For me, it's always been the basic and those are the foundations you need, although I look to bring a lot more than just that. Hopefully I can provide that missing piece and help create a lot of chances.

"I saw a bit of the division when I was with Luton. I know it's a very physical league, which I'm looking forward to, and hopefully we can have a positive season and push on.

"It's a great opportunity for me and I want to play a big part in getting the club going back in the right direction, hopefully chipping in with goals myself."