Scunthorpe United is delighted to complete the signing of former Tottenham and Leicester striker Ryan Loft on a two-year deal. 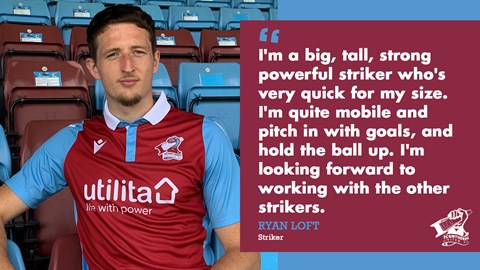 The 6ft 4in forward joined the Iron on Monday and the 22-year-old becomes our eighth new addition of the summer.

Gravesend-born, he signed for Spurs in 2013-14 after playing for Dartford and Ebbsfleet United. While there, he enjoyed loan stints with Braintree Town, Stevenage and Exeter City.

In 2018, he left Tottenham, for whom he figured in the EFL Trophy and scored away at Luton.

That summer, he joined up with fellow Premier League side Leicester where he continued his development and made numerous appearances in Premier League 2 and the EFL Trophy, scoring away at Fleetwood and Rochdale.

Last season saw him sign for our fellow League Two side Carlisle on loan, and he found the target six times. This included the winner in their 1-0 success at the Sands Venue Stadium last August.