Iron quintet Andy Butler, Abo Eisa, Alex Gilliead, John McAtee and Levi Sutton have all been busy on their phones in recent days, making personal phone calls and video messages for supporters who have renewed their 12th Man packages for 2020-21. 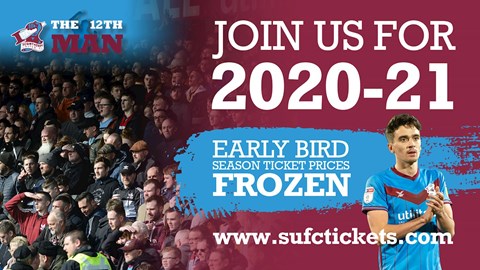 The players have been attempting to call those who have renewed via the phone numbers we have on our database to personally thank them for the support and getting behind the lads early ahead of next season, while video messages have also been emailed to supporters with Junior Iron season ticket holders.

We'd like to thank all our supporters who have bought 12th Man packages for the 2020-21 season so far. This is massively helping the club during this period of time and you can make big savings by buying at Early Bird rates from http://www.sufctickets.com.

See our video by clicking here.

Join us for the 2020-21 season, with the 12th Man Package early bird price FROZEN for the seventh consecutive season. Packages are available to buy now!

The early bird deadline has also been extended until Friday 22nd May, giving supporters additional time to take advantage of the most affordable way of watching the Iron at all 23 home league games next season.

The advance price period will not be in operation, with prices reverting to full price from Saturday 23rd May.

By signing up now, you'll make big savings and help your club be financially stable and prepared for the new season.