The Iron return to league action on Saturday as they host Bradford City at the Sands Venue Stadium (kick-off 3pm). 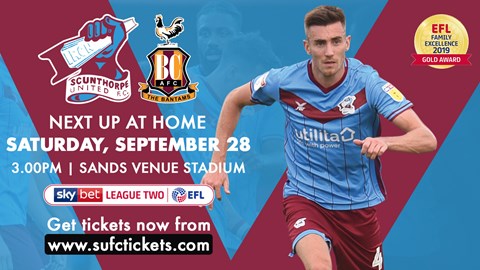 The Iron head into the weekend’s action on the back of a 1-1 draw with Leicester City Under-21s in the Leasing.com Trophy (which saw a number of players feature after periods out with injury) and a narrow 1-0 defeat to Walsall last Saturday in the league.

The visitors Bradford City have enjoyed a positive start to their league campaign, following relegation from Sky Bet League Two. The Bantams sit in sixth place, with a points haul of 17 from 10 matches played. The West Yorkshire club were also in Leasing.com Trophy action on Tuesday, narrowly losing out to Manchester City Under-21s.

A win for the Iron would see Paul Hurst’s men draw further away from the drop zone, which Stevenage currently occupy.

Paul Hurst said a decision would be made after training on Friday on whether Jamie Ward is ready to start a game, after the free agent striker signed on Wednesday following a spell on trial with the club.

Andy Butler made his return from injury on Tuesday, and picked up a late knock but should be okay for the weekend. Elsewhere, Kgosi Ntlhe, Levi Sutton and Jacob Bedeau came through their first 90 minutes in a while well. Andy Dales is also fine after coming on as a late substitute in that game.

Ryan Colclough will be assessed ahead of the game, as he has a little swelling on his knee after coming through his first two sets of 90 minutes since last year earlier this week.

Yann Songo'o and Junior Brown picked up knocks at Walsall but have recovered and returned to training.

The game will probably be too soon for Jamie Proctor (calf) and Lee Novak (ankle), while Jordan Hallam (ankle) remains absent.

Bantams manager Gary Bowyer said: "Everyone is surprised where Scunthorpe currently find themselves. I say currently because they have a good squad and a great manager, in Paul Hurst. He has a re-building job on his hands. Paul's set about that but the new players need time to gel."

The Iron suffered a 3-2 defeat at the hands of the Bantams last time out, with Kyle Wootton and Lee Novak grabbing the goals for United.

The Iron’s last victory against Bradford City came in November 2017, coming from behind to win 2-1, with goals from Cameron Burgess and Hakeeb Adelakun.