Manager Paul Hurst praised his players’ excellent efforts as they drew 1-1 at home to high-flying Bradford City after playing with ten men for more than 75 minutes. 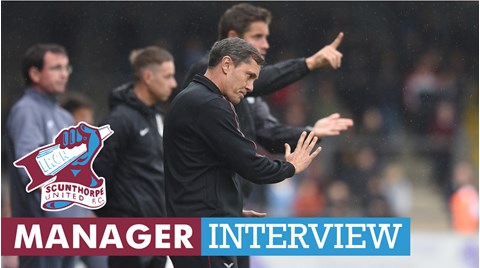 Debutant Jamie Ward gave Scunthorpe the lead from the penalty spot on 13 minutes, but Matthew Lund was then sent off six minutes later.

United defended resolutely but the visitors equalised through Paudie O’Connor in the 56th minute.

Hurst told iFollow Iron: “We’re pleased with the players and the effort they put in. We certainly deserved a point. I know we had to soak up pressure, but I’m not sure how many saves Rory (Watson) had to make. There were some, but not loads.

“I was disappointed with their equaliser, as there was certainly a foul throw in the lead-up to it. Their player’s foot was well on the pitch and we’ve just seen that back. Even then, I’m not sure whether it was a corner or not, so we were disappointed on that side.

“Overall, the players’ efforts were excellent and they put in a real shift. I thought all the lads performed well, and the substitutes had a good impact when they came on as well.

“I think we should have had another penalty (when Regan Slater’s late first-half shot was blocked). I’ve seen that back and the player’s hands are nowhere near his body. I think there was a little debate about the first one, and I’m going to be biased of course but I can see why he gave it. Watching it back, it certainly looks more of a penalty than I thought. It’s ‘Catch 22’ I suppose because had he not given that first one I think we’d have got the second.

“We had one big chance in the second-half with Jamie Ward. There was great movement but he just didn’t get a connection to turn it in.

“Overall, I think the fans have gone home pleased with the application of the players and they saw they deserved something for their efforts on the day.”

Speaking about the dismissal of Lund, who now faces a three-match suspension, Hurst continued: “(Their player) has got away from Lundy, and I think from Lundy’s response, you almost get the feeling it wasn’t a big surprise when he received that. First thoughts, having not seen it back (in a replay) yet, I can understand why it was a red.”

Overall, Hurst is pleased with the spirit displayed by his players during the last couple of matches.

He stated: “It should give them confidence and it helps with togetherness. You don’t want to go through that sort of game really but it sometimes helps give you something to build on.

“We’ve seen that in the last three home games now, and we’ve won one and drawn two. The manner of this draw and the one against Oldham, coming back from two goals down, shows there’s character in the side, and that’s important moving forward. You’re going to have good days, and you’re going to have ones where things go against you, and hopefully we’ll have days where everything’s right and you play well and get the wins.

“I keep saying it, but I feel like we’re making genuine progress. What I would say is we keep seemingly coming up with issues and problems that I’m not sure I’ve come across much in my career in football, whether that’s as a player or as a manager. We lost Kev (Kevin van Veen) today, lost Proc (Jamie Proctor) recently, just as we were getting people back, and then today we now lose Lundy.

“I’ll look at it and if there’s any way we can appeal we will, but first impressions are he’ll serve a three-match ban. So, that means we need to come up with something else again, as he’s been an ever-present for me in the league certainly. These things are certainly testing, but you enjoy it a lot more when you see the players giving the effort and commitment to the shirt that they did today.”

Talking about van Veen’s absence, Hurst explained: “Overnight, Kev felt his ribs were too sore, so he came in for a fitness test and certainly wasn’t right.

“It’s frustrating because it’s a knock from Walsall and he’s trained this week. He would have played so we had to make a last-minute change.

“He didn’t want to let the team down, and I’d like to think it’s nothing that’s going to be long-term certainly but we’ll see how he goes next week.”