Forward Ryan Colclough reflected on his first league 90 minutes since November 3rd, 2018 against Walsall at the weekend. 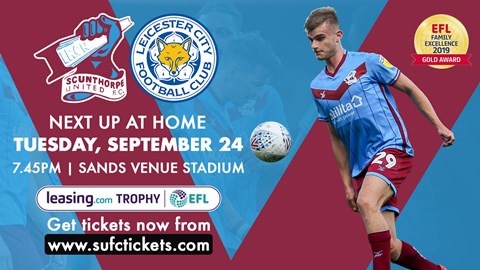 While the 24-year-old was unhappy with the overall result against the Saddlers, he believes getting through the game is another stepping stone to Iron supporters seeing him get back to his best.

“It (Saturday’s result) was disappointing for us all,” he told iFollow Iron.

“We’ve had a meeting on Monday morning about what we could have done better and we have to put that behind us now and look forward to the next game.

"Hopefully we can put on a performance for the fans at home because I think at the moment we are playing well, but we need to cause more danger to the opposition and definitely score more goals.

“It’s been a long time coming for me. It’s something I’ve been looking forward to a lot and to get back out there and play 90 minutes especially is a great feeling.

"I was tired in the last 10-15 minutes, but I enjoyed being back out there and I can’t wait to get more minutes under my belt now and hopefully get a run of games and get back to where I know I can be.”

After a lengthy lay-off with a serious knee injury which abruptly ended his 2018-19 season last November, Colclough returned to action in the early stages of this campaign.

A groin injury did curtail that return a couple of weeks ago, but the attacker is looking to kick on after his return to the team.

“I got my groin injury in training, I came back and I haven’t been very well and also my groin was tight again,” he explained.

“It just wasn’t worth risking after being out for so long. I’m just trying to look after myself as best as I can and it’s about trying to get myself as fit as possible now, whether it’s through training or games. The fitter I get, the better I’ll be hopefully.

“I hope (it’s behind me). My knee is feeling good, it’s feeling strong and I’ve done a lot of work. I’m not really thinking about it now to be honest because I’m getting through training and games. Now it’s just about my fitness.”

The game against Leicester City’s Under-21s presents the Iron with a chance to progress to the knockout stages of the Leasing.com Trophy with a game to spare. For Colclough, it’s an opportunity to get a winning run started and a chance to continue to get towards his peak fitness and performance levels.

“For us as a group, we’ve not won many games recently and I think that the more games we do win, there’s a better chance of us getting into that winning mentality,” he continued.

“As soon as we get a couple of wins under our belt in a row, we will be fine. If you look at the performances, they’re not far wrong. Sometimes it’s just silly mistakes or maybe not being clinical enough.

“It doesn’t matter who we’re playing against, every game is important. Every game is the next one for everyone to stake their claim in the team and I’m sure everyone will be looking to impress the gaffer. If we get a win under our belts, it will look good for us going into Saturday.

“They’re a Premier League side, so you’d like to think they’ll have a good Under-21s side. That’s not the important thing for us, it’s about focusing on us to see what we can do to put on a run of form.”