Manager Paul Hurst has provided an update on several players ahead of the trip to face Newport County this Saturday. 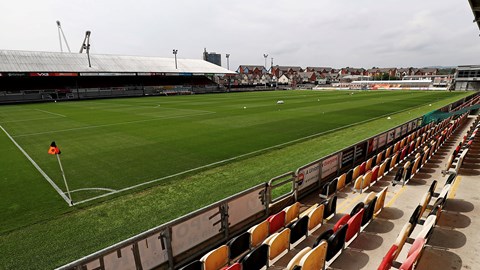 Hurst has confirmed that following a scan there’s no fracture on Rory Watson’s cheekbone or nose, but the club will still have to go through the necessary concussion protocol. If he passes that, he will be available for Saturday’s game.

Meanwhile, Kevin van Veen has been fine this week after coming off at half-time last weekend with an injured ankle, and has trained from Tuesday onwards.

There is still illness in the camp though and the manager will assess the squad before deciding who travels to Rodney Parade this weekend.

“This week has gone pretty well, though we were disappointed the Grimsby Under-23s game was called off as a couple of lads would have played in that, so they just had training instead,” Hurst explained.

“There are still one or two things going around in terms of illness, which hasn’t made it as straightforward as we’d like. But we’re in good spirits after the result last weekend and, while we’re focusing on Newport, the next two games (against Newport and Exeter) will provide us with real tests in terms of the league table – with one at home and one away.

“It feels like Groundhog Day at the minute but there is definitely illness around. Myself and Chris (Doig) have had it, as have one or two other members of staff, but we’re alright because we don’t have to run around! Squad-wise, we have had some in there and I am conscious of players travelling in together and aspects like that, so we’re trying to limit the impact of that. We need all the energy we can muster for these next two games certainly because we’ll need to be at the top of our game if we’re to get the results we all want.

“We have another lengthy trip on Saturday. Our last away game was Plymouth and this isn’t as far as that, but it’s a fair old journey for us. We have to look at it as a good challenge. We’re in the best run of results we’ve had this season, losing one of the last six in the league, and are on the back of a good victory against Northampton. We’re making progress and strides forward, and that thankfully played out last Saturday in terms of the result as well.

“These next two games will be a good test and measure of where we’re at against two of the best teams in the league so far this season.”

The manager provided an update on defender Jordan Clarke, who has been out of action in recent weeks after having his appendix removed.

Hurst said: “He will certainly have a couple of weeks where he’s limited in what he can do in terms of real physical work. We can get him doing some work in the gym but that’ll be it really, and then after that he can pick back up. I think we’re at least a month away from any kind of return for Jordan though.”

Focusing more on Saturday’s game, the boss continued: “I expect a massive challenge. They’ve changed system a little bit this season but at home they have the joint best record, with one defeat in their last 22 league games, carrying over from last season.

“They have the best defensive record in the league and all the stats are there that back up why they’re at the top end of the league. They’ve perhaps not scored as many goals as they would have liked, but I’m a big believer that if you’re strong defensively you give yourselves a great chance.

“Maybe in their camp they’d have liked to have scored a few more, and maybe turn a couple of draws into wins. Newport is known for being a very tough place to go, and they’re a very hard-working team. They have a nucleus of players that just missed out in the play-off final last season. We’ll have to go there, be at our best and show we’re a good team as well.”

He thanked the supporters making the long journey for their efforts, continuing: “It is a long way but we appreciate the efforts the fans go to and the support they give. It should be a test for us, and I’m sure at some point in the game we’ll need the fans to be with us as well. All I can say is we want the team to go out there and give everything for the football club and those travelling fans to make the journey home a good one again.”