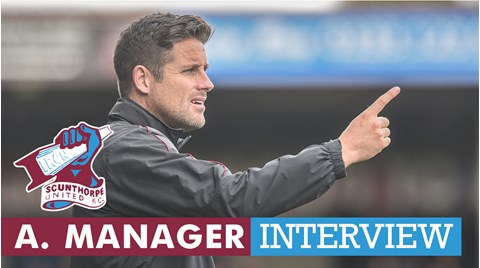 Lee Novak struck a brace on 11 and 14 minutes, while Kevin van Veen notched a spectacular third in the 31st minute to seal victory against the Cobblers.

Doig said: “If you’d have said that (we’d win 3-0) before the game, I’d have bitten your hand off for it. It was a very strong performance in the first-half with three very good goals which put us in a commanding position.

“We would have liked to have gone on and be more progressive in the second-half, and score a couple more goals. Unfortunately, it didn’t pan out that way, but I’m not going to stand here and be critical of the lads. We’ve won the game, scored three goals and kept a clean sheet.

“As much as maybe we could have been better in the second-half, we have to take confidence from the win and move on.

“It’s always great to see your strikers scoring goals. They were three very good goals, which included a good finish from Novs after a great ball from Coco. The second was instinctive from Novs, in the right place at the right time, after a good header from Kev. Kev’s finish for the third one was fantastic and we know he can do that. I felt we played really well in the first-half and hopefully the lads can take confidence from that.

“A big positive is the clean sheet. We did say at half-time we wanted them to go on and be more dominant in the second-half, trying to get another goal or two if possible. It doesn’t always pan out that way. Playing against ten men (in the second-half), we have to give them (Northampton) a bit of credit, but we’d have liked it to have been better.

“There are things to work on and ultimately I think things will improve through confidence. The main thing for confidence is winning games, so the priority was to win the game. We did that and kept a clean sheet, so we’re pretty happy.

Rory Watson had to come off early in the second-half with a facial injury sustained following a challenge by Vadaine Oliver, while van Veen was substituted at half-time. Doig explained more to the press following the game, adding: “I didn’t actually see the contact made. When you see Rory come off, his face is in a pretty bad way. I think the striker had to go for it and I don’t think there was any intent in his challenge, but he’s obviously caught Rory, and the referee has seen something to make it a red card. Rory will get a scan on Monday to see if there’s any damage structurally to his face and we’ll then take it from there.

“Kev went over his ankle towards the end of the first-half. Obviously being 3-0 up, we had the luxury to take him off, but we also had Procs (Jamie Proctor) to come on, so Procs got 45 minutes, which will do him no harm at all. Kev didn’t feel he could carry on, so it was the right thing to take him off and it’s not a bad replacement to come on in Procs.”

Next up for the Iron is a trip to take on Newport County next Saturday, and Doig continued: “It’s just a case of continuing what we’re doing. If we do the right things and work hard, the results will follow. Things have been improving for a while and the biggest thing for me week-by-week is the atmosphere amongst the lads. There’s a really good spirit amongst them and we can see a big improvement on that. It looks like the lads are starting to settle in and gel together, which is pleasing to see.

“Hopefully this result will give them more confidence for what will be a very difficult test at Newport against a direct, physical team. Again, we’ll have to stand up to that.”

Speaking just before the game, manager Paul Hurst explained to the club's social media channels some of the injury and illness worries that he'd kept under wraps from Northampton pre-match.

“James Perch hasn’t recovered from the injury which forced him off at half-time last week," he said.

“We’re missing Jordan Clarke, who has been absent for a little while after having his appendix removed. He will be out for quite a bit longer yet.

“Jamie Proctor had been ill during the week but recovered sufficiently enough to make the bench.

“Jacob Bedeau and Andy Dales both picked up calf injuries in the Under-23s game at Port Vale.”