The Iron's Under-18 side return to action eight days after progressing past Notts County in the FA Youth Cup, this time facing Morpeth Town at the Sands Venue Stadium for a place in Round Three (kick-off 7pm). 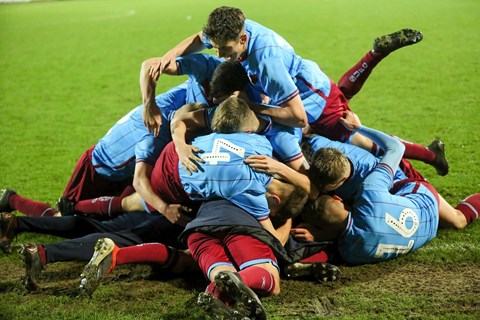 The winners of the Round Two tie will be rewarded with a trip to West Bromwich Albion in the next stage of the competition.

The side head into the encounter off the back of a hard-fought 1-0 victory against their Notts County counterparts at Meadow Lane in Round One of the FA Youth Cup.

The match went to extra time, with Raynner Silva scoring direct from a corner to ensure passage through to face Morpeth Town in the second round at the Sands Venue Stadium. Aside from that fixture, the Iron haven't played in four weeks in the EFL competitions, with four fixtures across the Youth Alliance League and Cup all falling victim to the weather.

Morpeth Town Under-18s come into the game having beaten Chester City 1-0 in the last round to get to this stage.

It will be the side's sixth match in this season's competition after having to begin from the First Qualifying Round. They saw off Guisborough Town with an 11-0 away win to kick things off, before getting past Spennymoor Town in the Second Qualifying Round with a 3-1 win away from home.

The Highwaymen were finally drawn at home in the Third Qualifying Round, brushing aside Workington 9-1 before advancing to the First Round Proper after a comfortable 4-0 win over AFC Fylde.

The United side have had eight days recovery from their last encounter which went to extra time and the team will be eager to continue their winning run and stretch it to four straight wins in all competitions.

Joey Dawson came off with a calf injury in that win, and will be assessed ahead of the game, with a number of players all feeling the effects of the effort put in at Meadow Lane, but have had ample time to be ready for the latest tie.

ELSEWHERE IN THE FA YOUTH CUP ROUND TWO