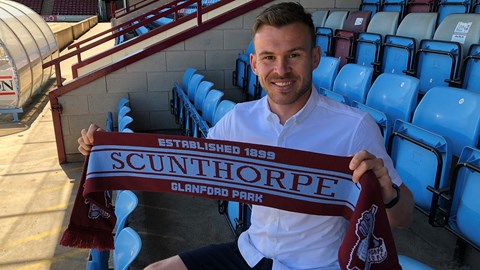 The Doncaster Rovers defender pens a one-year deal to become our first addition of the summer and add some special qualities to the squad.

The 35-year-old returns to Glanford Park having originally risen through the youth ranks here and making over 150 appearances, scoring 15 goals, up to his departure for Huddersfield Town in 2008.

Hurst told the club website: “We’re pleased to get someone of Andy’s experience. I think he’ll bring leadership to the squad as well. He obviously knows the club and has just had a successful season at Doncaster, where he played a lot of games. He is still a very fit lad.

“I saw quite a bit of Doncaster last season and he always impressed. He’s a good presence in both boxes as well and will be a very good addition to the squad moving forward. He’s also left-footed and there aren’t an abundance of left-sided centre-backs, so we now have two with him and Cameron Burgess.

“There should be no real settling in period with Andy, because of his experience and because he knows the club. We haven’t worked together before and we’ll try and build a relationship very quickly.

“When I spoke to him, we were on the same page and he’s still ambitious. It isn’t a move just out of comfort. He went close to promotion this season and in the long-term that’s what we want to be fighting for.

“I look this year at the team and squad and there are good players here but maybe we’re lacking in certain areas and I think Andy, character-wise, fits one of those areas that we’ve perhaps been lacking a bit. Hopefully he can bring that and competition to the backline.

“Last season, the team conceded too many goals. Hopefully he can help plug that gap – whether that’s in the team or through advice to the players on the training ground. One thing’s for certain, he’s come wanting to be in the starting line-up and it’s down to himself to show he should be.”

Speaking about the prospect of further additions, Hurst continued: “There have been a lot of phone calls, messages and emails backwards and forwards. I’ve identified some further players I’d like to sign but, as we speak, I’m not sure anything is particularly close. However, I think there have been some positive conversations.

“We have a lot of players that are under contract too and I’m conscious of that because we can’t just stockpile players and I wouldn’t want to do that. I don’t want to work with a particularly big squad, I prefer a close-knit group and that’s something we’ll be discussing.

“Clearly, there are still some areas that we need players in. We do have more strength in some positions than others. It will be a case of sitting down, identifying that and seeing how we can move things forward.”

Sign up for the Iron next season like Paul and Andy by buying a 12th Man package at advance rates. Click here to purchase at those prices before 5pm on Friday, May 31st.