United manager Stuart McCall felt a half-hour period in the first-half cost his side, as they suffered a 1-0 home loss at the hands of Bristol Rovers. 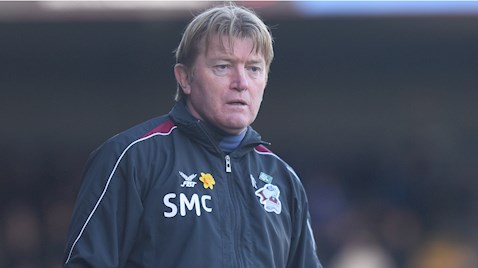 Jonson Clarke-Harris’ effort during that spell secured the win for the Pirates, who held on despite pressure from the hosts.

McCall told iFollow Iron: “We started the game in a good manner in the first 10-15 minutes, and were getting it out to Hammy (Adam Hammill), who had a good shot which the goalkeeper parried down and then another shot over the bar. Then, for whatever reason, we stopped playing and they came into the game. They started dominating the possession and the goal, if I’m honest, was coming. They hit the post just before too.

“Looking at the stats, they had four shots and one of those on target. It looked like the lads were playing in a testimonial game, because even though we started the game well and were on the front foot, for 30 minutes we took our foot off the gas, stopped playing and they took control of it. They played a diamond as we expected and the boy (Ed) Upson in front of the back four dominated the game for a little period.

“We were flat. The crowd’s not vibrant at the moment, naturally, but we have to give them something to get off their seats about and we didn’t do that enough in the first-half. We wanted to carry on in the vein we started in and I don’t know why we didn’t. We lost too many battles in that period, and were lethargic and flat.

“We were better in the second-half, though we huffed and puffed. We got it in some great areas and wide for the full-backs but the quality wasn’t good enough, apart from Tom putting a great ball in for Kev (van Veen), who I thought did well today, but he’s got to head it. The number of times since I’ve been at this football club when I’ve spoken about balls coming in. It’s a thing modern day players seem to do, where they try and volley it rather than head it.

“We lost the game in that 30-minute first-half period and when you’re down here and scrapping, the first goal is huge and we gave them something to hang on to. They defended for their lives and I thought their centre-halves dominated our strikers for long periods, as did Clarke-Harris with our centre-backs.”

He added: “The best thing is we have a game on Tuesday (against Southend at Glanford Park) and when you lose like we did you can’t wait to get back out there, but it’s no good saying that – we have to go out there with a desire and determination to win a game of football.

“There will be no doom and gloom (in training) on Monday. We have ten games of football to go, let’s show that we can be a good side. I’ve said before that on our day we can be a match for anyone.”