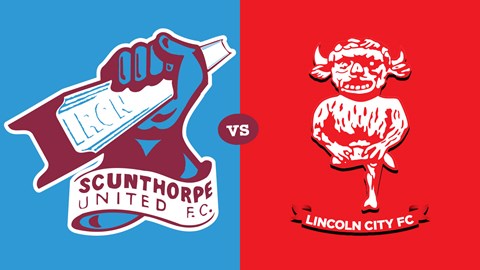 Click here to get your tickets for the clash with the Imps.

Danny Cowley’s side are preparing for life in League One after winning the League Two title last season, and the 23-year-old told iFollow Iron: “Everyone wants to be in that starting eleven but things change in football. We have to just prepare for that game like it’s a league match and go from there.

The attacker, who signed from Shrewsbury Town this summer, scored one and set up two in the clash at Alfreton Town on Tuesday night, with United running out 4-1 winners.

“I’m happy to get the goal. Even though it’s pre-season, it’s good to get off the mark,” he continued.

“It’s something I felt I needed to improve on when I first came here. A goal and a couple of assists are things I’m always happy with.

“There was a come together between me and Lundy (Matthew Lund), I think he tried to nick it off us but I’ll take it! That’s what I try to do, I like to get at people and shoot.

“We changed a few things at half-time, and came out scoring a few good goals and it’s a good confidence boost.”

Gilliead joined the Iron just after the pre-season training camp in La Manga and is feeling fit and positive ahead of the new campaign.

“I’m settling in well. The lads are all sound with us and I get on with the gaffer (Paul Hurst) and Doigy (assistant manager Chris Doig) very well.

“There’s a lot of games and hard running but we’re looking forward to Lincoln on Saturday and then the season getting started next week.

“I feel good (in terms of fitness). There have been some hard sessions but I feel I’m getting fitter and sharper each day, and want to keep improving.

“I feel I’ve done well in training and games. There are certain things I know I need to improve on but that will come with games. I’m looking forward to getting going.”