Scunthorpe United is pleased to release the first full images of the brand new 2019-20 home kit. 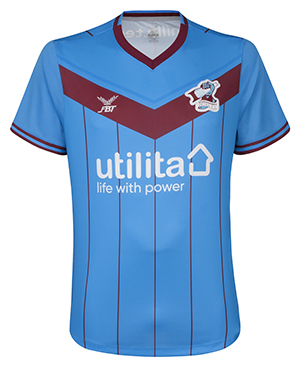 The players will wear the kit for the first time on Tuesday evening when they take on Premier League side Leicester City, with full details on when supporters can buy detailed below.

The design is based on the 1982-83 season shirt when current Iron President and sporting legend, Sir Ian Botham played for the club and resulted in the club being promoted from the old Division Four.

The modern version is a blue shirt with a claret V design across the chest. Claret pinstripes are underneath the V, and on the reverse. It also features a claret V neck collar and claret and blue sleeve trim.

The shorts are claret with a blue trim at the bottom, and it will be worn with claret socks with SUFC and FBT blue detail. 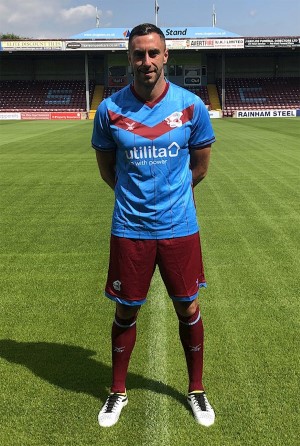 Brand new front of shirt sponsors Utilita are featured on the front with a white logo, while Vanilla Tech and Pepperells Solicitors will once again feature on the reverse of the shirt and shorts respectively.

The kits for retail are due to arrive in-store and become available for supporters to wear on Wednesday July 24th but you can be one of the first to get their hands on the shirt by pre-ordering in-store or online at www.sufcshop.com.

Everyone who pre-orders a shirt before midnight on Tuesday July 23rd will go into a draw to win a new home shirt, signed by the first team players.

Prices will once again be frozen making it one of the best value shirts in professional football.

The away kit, also selected as a result of the supporters’ kit vote, along with the goalkeepers’ shirts, will also go on sale on Wednesday, July 24th too and will be revealed ahead of that date.

The team’s third kit will also be revealed in due course ahead of its release.

*Supporters are advised that the shirts are regular sized for the 2019-20 season.